Mitt Romney's New Hometown is Going to the Birds 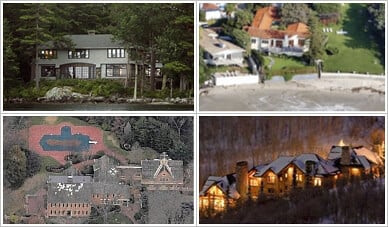 During his first run for the White House, Mitt Romney briefly crowed that "I've been a hunter pretty much all my life." But two days later, he was forced to amend that pander to the NRA by clarifying, "I've always been a rodent and rabbit hunter. Small varmints, if you will."
Now his new hometown of La Jolla, California may have a job for Mitt Romney, Varmint Hunter. As it turns out, the swanky beachside town where the Romneys went to "downsize" in 2009 is overrun with thousands of birds whose excrement has residents and tourists alike holding their noses.
As the AP reported, the rich and famous of La Jolla are very unhappy with their neighbors, roughly 47 percent of which are environmentally-protected cormorants and brown pelicans:

On the sandy shores of La Jolla, California, life's not a beach. And it rather stinks.
The upscale San Diego community where former presidential candidate Mitt Romney, billionaire businessman Irwin Jacobs and other super-rich call home is becoming caked with bird droppings from the hundreds of seabirds that have flocked to the coastal town.
The stench is beginning to drive away tourists and causing homeowners and local businesses to debate what to do about the pelicans and cormorants that nest there.

While the birds built that stench, self-deportation is not an option. Environmental protections put in place since DDT nearly wiped out cormorants and brown pelicans have restored their populations along the California coast. The birds are especially fond of their nests in the bluffs overlooking the Pacific Ocean in La Jolla.
Unfortunately for them, the Romneys are fond of their La Jolla nest, too. By early 2010, their $12 million, 6,000 square foot beach side house with the future car elevator had become their primary place to live (if not vote). Shedding their multimillion dollar mansions in Belmont, Massachusetts and Park City, Utah, the Romneys selected La Jolla because, an aide explained, they were "downsizing and simplifying." (Last year, Romney tried to simplify further, asking San Diego County to slash his tax bill by assessing his home at only $6.8 million.) During the 2012 campaign, Ann Romney boasted that, unlike Michelle Obama, her family wouldn't have to take expensive vacations because she and Mitt "own places for that."
But now, one visitor complained, La Jolla "smells like something dead." With restaurants forced to close patios due to the nauseating stench of the mounting bird poop, waitress Jessica Manns nevertheless explained that "I think they are a tourist attraction and this is a tourist area so it probably wouldn't be a good idea to try to get rid of them."
But if the desperate residents of La Jolla change their minds, they can always call on Mitt Romney. After all, Romney the Varmint Hunter already earned a reputation for chasing pot-smoking stoners off his beach. If nothing else, he could drive the birds to Canada strapped to the roof of his car.