Next Year in Tehran?

As President Obama faced the looming re-election campaign in the spring of 2012, he issued a stern challenge to those critics of his approach to the Iranian nuclear program. "When I see some of these folks who have a lot of bluster and a lot of big talk but when you actually ask them specifically what they would do," Obama pointed out, "It turns out they repeat the things that we've been doing over the last three years." Slamming the "casualness" of their incendiary rhetoric, President Obama declared, "This is not a game." And that wasn't all:

"If some of these folks think that it's time to launch a war, they should say so. And they should explain to the American people exactly why they would do that and what the consequences would be. Everything else is just talk."

Six years later and on the eve of the third anniversary of the Joint Comprehensive Plan of Action (JCPOA) agreed to by Iran and the P5+1 powers, the cheap talk is back. That's because Donald Trump has set himself a May 12 deadline to reimpose sanctions on Iran if Tehran does agree to major new concessions beyond the scope of the deal. And while France, Germany, the U.K., and U.S. Defense Secretary Jim Mattis have pleaded with him to continue the agreement with which Iran has consistently complied (the International Atomic Energy Association [IAEA] has now certified that compliance 9 times), Trump is threatening to rip up the accord. And if he does, Donald Trump could unleash a devastating regional conflict that will make the Iraq war seem like a walk in the park. 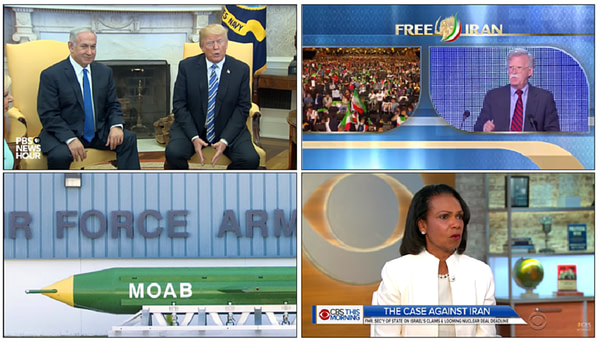 As it turns out, that next disaster is being encouraged by many of the same voices who brought you the first one. Despite opposition from much of his current and former military leadership, Israeli Prime Minister Benjamin Netanyahu re-emerged this week to urge Trump to back out of the deal. His English-language PowerPoint presentation only supported what American intelligence had concluded in its 2007 and 2011 National Intelligence Estimates: Iran had a clandestine nuclear weapons program which it halted in 2003. (Of course, Bibi was silent about the last time he pressed Americans to attack an Israeli foe in 2002, when he predicted, "If you take out Saddam's regime, I guarantee you it will have positive reverberations on the region.")
Former Bush National Security Adviser and Secretary of State Condoleezza Rice--the same Condi Rice who in the fall of 2002 warned "we don't what the smoking gun to be a mushroom cloud"--proclaimed on Tuesday that "I don't think it's the end of the world if the administration leaves the agreement." And failed Iraq war cheerleader-turned-Trump national security adviser John Bolton, who in 2015 penned a New York Times op-ed titled simply "To Stop Iran's Bomb, Bomb Iran," promised a conference of the Iranian resistance group "People's Mujahedeen" (MEK) in Paris last year that the United States would go Old Testament on the Ayatollah's government in Iran:

"The declared policy of the United States should be the overthrow of the mullahs' regime in Tehran. The behavior and the objectives of the regime are not going to change and, therefore, the only solution is to change the regime itself. That's why, before 2019, we here will celebrate in Tehran!"

Leave aside for the moment America's calamitous experience with regime change and preventive war in 21st century. Bolton, Bibi, Condi, and their ilk are casually omitting two vital points when it comes to preventing Iran from developing nuclear weapons. Either the United States and its allies will immediately need a robust inspection regime to foreclose the possibility of Iranian cheating or they will need to launch a massive military campaign to thoroughly destroy the Iranian nuclear infrastructure. To put it another way, choosing to "jettison" the current JCPOA agreement means the Trump administration will either need a new accord very much like it or it will have to go to war.
Continue reading at Daily Kos.