No Comfort for Bush on the Economy

Nothing seems to frustrate the White House and the Republican leadership more than their abysmal poll numbers on the economy at a time of booming GDP and a resurgent job market. It is, they claim, all about the war.
But as I wrote in the "Bush League Economy," the issue for the President and the GOP isn't the Iraq war overshadowing a robust economy, but the growing insecurity most Americans experience daily with surging energy prices, spiraling health care costs, stagnant incomes and mounting debt. The latest data on Americans' Consumer Comfort from the Washington Post and ABC News suggests that I have it about right and the Republicans, well, not so much.
But you can't blame a brother for trying. In an interview with NBC's David Gregory yesterday, President Bush blamed his dismal poll numbers on Americans being "unsettled" by the war in Iraq.

"Because we are at war, and war unsettles people. Listen, we got a great economy. We've added 5.2 million jobs in the last two and a half years. People are unsettled."

Bush's feeble attempt at spinning his weak approval ratings on the economy came just days after Karl Rove offered similar bromides to a gathering of conservative fellow travelers at the American Enterprise Institute. Asked what has gone wrong, Rove also blamed the conflict in Iraq:

"Look, we're in a sour time. I readily admit it. I mean, being in the middle of a war where people turn on their television sets and see brave men and women dying is not something that makes people happy and optimistic and upbeat."

Sadly for the President and his amen corner, the latest Consumer Comfort Survey shows that Americans are not clinically depressed when it comes to the economy, but instead are quite in touch with reality. 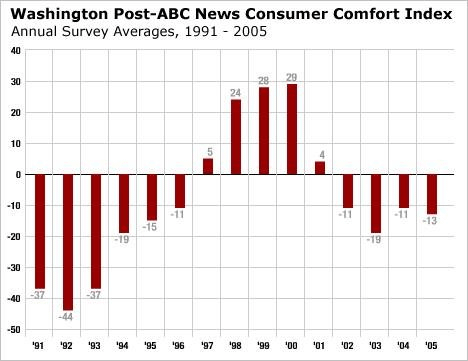 The 21 year-old weekly survey asks Americans three questions on the overall state of the economy, their personal finances and the buying climate for them as consumers. The resulting answers are averaged and produce values ranging from +100 (for positive answers on all three questions) to -100 (for negative answers). Historically, American Consumer Comfort Index (CCI) reached its pinnacle at +38 in January 2000 during the Clinton presidency, while bottoming out at -50 in February 1992 late in the term of George H.W. Bush.
The problems for George W. Bush and the GOP approaching the 2006 mid-term elections are just what you'd expect. The CCI has been negative for the entirety of Bush's two terms. And while the index has flirted with break-even over the past 52 weeks, high energy prices have driven it back down to -17. Even as Americans grow more optimistic about their personal finances, they remain downbeat about the economy overall and convinced that this is not a good time to buy the things they want and need.
Most striking are the disparities by income and political party. Every income group below $50,000 is strongly negative about the state of the economy and their ability as consumers to purchase life's necessities. In stark contrast, Americans making over $50,000 are more upbeat, with those earning over $100,000 a year downright giddy about their prospects. (With the extension just this week of low capital gains tax rates, their glee is apparently well founded.) The income numbers parallel part membership, with Republicans smiling at +22 last week, while Democrats and Independents were a gloomy -41 and -24, respectively. (For more on the glaring disparities in consumer comfort by race, geography and other factors, see the complete survey results. Other consumer confidence indicators are available here.)
In their May 18 interview, NBC's Gregory saw through President Bush's smoke-screen. "But they're not just unsettled sir," Gregory replied. "They disapprove of the job you're doing."
"That's unsettled," Bush replied.