"No One's Ever Asked to See My Birth Certificate": The Mitt Romney Story 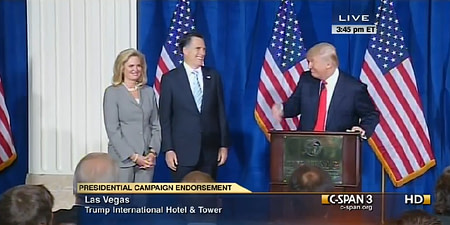 So, 13 months after Donald Trump took the oath of office, it's come to this for the Republican Party. Its putative leader used to be pro-choice. He routinely boasted about getting "everybody" insured, only to then promise to "kill" Obamacare. He not only reversed past positions at a rapid-fire rate, he lied to voters at a frequency that dwarfed recent nominees of either party. Having inherited great wealth from his father, he supported a massive tax cut windfall for himself and his family even as he fought tooth and nail to keep his own tax returns hidden from the American people. Throughout his lucrative career, he pocketed millions of dollars even as his companies went bankrupt. And in his battles with the first African American president of the United States, he casually trafficked in racist "Birther" slanders like this:

"No one's ever asked to see my birth certificate."

I am, of course, talking about Mitt Romney. And far from retiring to "take up knitting," the twice-defeated GOP presidential hopeful reemerged this week in the guise of a candidate to replace exiting Utah Republican Senator Orrin Hatch. But as a quick glance back at his record suggests, it's simply not true that "the Romney ethos could hardly diverge more from the Trump ethos." This week, the once and future white knight of the GOP gratefully accepted Donald Trump's endorsement, just as he did six years ago. That's because for all of his short-lived talk in 2016 about Trump being a "phony" and a "fraud" who was "playing Americans for suckers," Mitt was never #NeverTrump, but #AlwaysRomney.

That was clear during his on-again, off-again presidential quest heading into 2016. As he revealed in his self-serving eponymous documentary Mitt, he couldn't bear the pain of his defeat in 2012:
Continue reading at Daily Kos.