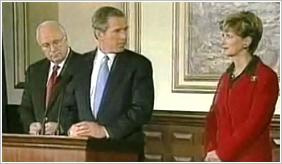 As the world's nations meet at the international climate summit in Copenhagen, it is worth remembering the President's promise to curb greenhouse gas emissions including carbon dioxide:

"As we promote electricity and renewable energy, we will work to make our air cleaner. With the help of Congress, environmental groups and industry, we will require all power plants to meet clean air standards in order to reduce emissions of sulfur dioxide, nitrogen oxide, mercury and carbon dioxide within a reasonable period of time. And we will provide market-based incentives, such as emissions trading, to help industry achieve the required reductions."

Those words came not from Barack Obama, but from George W. Bush. And when he made that pledge on September 29, 2000, then candidate Bush planned on keeping it just as long as it took to get him into the White House.
To win the presidency in 2000, ersatz environmentalist Bush promised to regulate carbon dioxide emissions in a cynical ploy to "out-Gore Gore." But in March 2001, only 10 days after EPA administrator Christie Todd Whitman publicly pledged to fulfill Bush's campaign promise, the White House reversed course. Later that year, Whitman was rolled again over the issue of "new source review" for the nation's older power plants. The EPA's suggested rule changes were rejected by the administration, she said, because the White House "wanted something that would be more pro-industry."
Just days before abandoning the Kyoto climate treaty altogether, President Bush jettisoned his campaign promise to "establish mandatory reduction targets for emissions of four main pollutants" including carbon dioxide. As the New York Times reported on March 13, 2001:

The president outlined his new view in a letter to four Republican senators, whose criticisms of Mr. Bush's initial plan had been among a torrent of protests by conservatives and industry leaders who warned that any effort to regulate carbon dioxide emissions could deal a severe blow to the energy industry and to the American economy.
As recently as 10 days ago, Christie Whitman, the new administrator of the Environmental Protection Agency, had described Mr. Bush's campaign promise as if it were already policy.

The imprint of Vice President Dick Cheney's office was clear in a White House memo which warned "any specific policy proposals or approaches aimed at addressing global warming must await further scientific inquiry." President Bush parroted that language in his March 2001 letter to the GOP Senators which reversed his plan to regulate CO2 emissions "given the incomplete state of scientific knowledge of the causes of, and solutions to, global climate change."
To provide a smoke-screen for its support of industry, the Bush administration continued to turn to its magical elixir of "scientific uncertainty" (a gambit repeated by Sarah Palin just today in her laughable Washington Post op-ed). Despite the overwhelming worldwide consensus on the urgency and man-made causes of global warming, President Bush in rejecting the Kyoto protocols in June 2001 declared:

"No one can say with any certainty what constitutes a dangerous level of warming, and therefore what level must be avoided.
The policy challenge is to act in a serious and sensible way, given the limits of our knowledge. While scientific uncertainties remain, we can begin now to address the factors that contribute to climate change."

Mercifully for the American people, in April 2007 the United States Supreme Court ruled that carbon dioxide should be considered a pollutant under the Clean Air Act. As the Washington Post noted earlier this week:

As a result, the court said, the EPA had not only the power but the obligation to regulate the gas. (In that case, Massachusetts v. EPA, the Bush administration was fighting against regulating carbon dioxide from vehicle tailpipes.)

While the Bush administration only in its last throes belatedly began to reconsider its 2001 stonewalling on carbon dioxide, it was Obama's EPA chief who finally set the regulatory wheels in motion this week:

In Monday's much-anticipated announcement, the Environmental Protection Agency said that six gases, including carbon dioxide and methane, pose a danger to the environment and the health of Americans and that the agency would start drawing up regulations to reduce those emissions.
"These are reasonable, common-sense steps," EPA Administrator Lisa P. Jackson said, adding that they would protect the environment "without placing an undue burden on the businesses that make up the better part of our economy." At the same time, however, EPA regulation is no one's preferred outcome -- not even the EPA's. Jackson said her agency and other administration officials would still prefer if Congress acted before they did.

Sadly, as the Post pointed out, Jackson's announcement "provoked condemnation from key Republicans and from U.S. business groups, which vowed to tie up any regulations in litigation."
But if there is any chance at curbing the carbon dioxide emissions which threaten the planet with irreversible global warming, it will only be because the Environmental Protection Agency finally acted to classify CO2 as a threat to public health, a process EPA's Jackson noted "had been sitting for years."
Still, there is at least hope now that candidate Bush's 2000 promise to regulate carbon dioxide may finally be realized. But only because Barack Obama kept it.