Obama on the Economy: 'We Didn't Know How Bad It Was'

During his presidency and after, George W. Bush was often criticized as the "nobody could have predicted president." After all, from 9/11 and the post-invasion chaos in Iraq to Hurricane Katrina's drowning of New Orleans, the economic calamity of 2008 and so much more, Bush and his team repeatedly claimed "I don't think anybody could have predicted that."
So when Obama White House spokesman Jay Carney announced last week that "There was not a single mainstream, Wall Street, academic economist who knew at the time, in January of 2009, just how deep the economic hole was that we were in," voices across the political spectrum rightly took him to task. But when President Obama lamented Tuesday that his administration "didn't know how bad it was," a look back at the numbers show just how right he was.
The President expressed that regret during an interview with KIRO TV in Seattle. Asked "What's the one thing you know now that you wish you would have known when you were first sworn into office," Obama didn't hesitate:

"I think we understood that it was bad, but we didn't know how bad it was. I think I could have prepared the American people for how bad this was going to be, had we had a sense of that."

That's not to say no one was sounding the alarm that the forecasts from government agencies such as the Bureau of Labor Statistics (BLS) and the Congressional Budget Office (CBO) were understating the magnitude of the American economic calamity. As Ezra Klein recalled in October:

There were certainly economists who argued that the recession was going to be worse than the forecasts. Nobel laureates Krugman and Joe Stiglitz were among the most vocal, but they were by no means alone. In December 2008, [Jared] Bernstein, who had been named Biden's chief economist, told the Times, "We'll be lucky if the unemployment rate is below double digits by the end of next year."

Still, the official forecasts were what they were. And as Klein pointed out, "There was only one problem: It was wrong."
Consider the reports on economic growth and unemployment as Barack Obama was taking the oath of office in January 2009. As the New York Times reported 10 days after Obama's inauguration:

The U.S. Commerce Department said gross domestic product, the widely followed measure of the economy, shrank at a 3.8 percent pace in the final three months of the year. That compared with a 0.5 percent decline in the previous quarter. 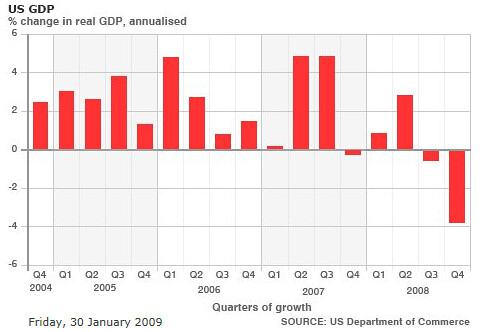 That same day, the BBC noted that "The non-partisan Congressional Budget Office (CBO) estimates a drop in real GDP for 2009 of 2.2%, followed by a rise of 1.5% in 2010, while the IMF predicts a fall of 1.6% this year, following by a recovery of 1.6% in 2010." For its part, the CBO that same month estimated that unemployment "is projected to peak at above 9 percent early next year." That projection in part was the basis for the Obama administration's now infamous prediction that after the stimulus program passed that February; joblessness would peak at 8 percent in the fall of 2009. 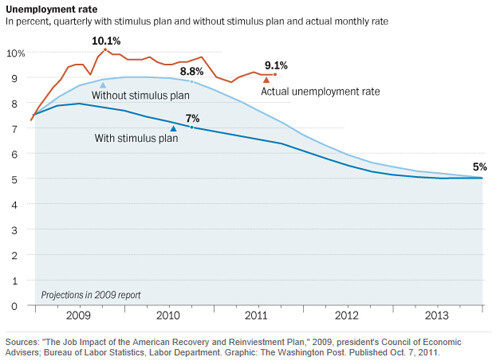 Unfortunately, only much later did Obama's team - and the American people - learn just how catastrophic the U.S. economic situation was at the beginning of 2009.
As The Economist and the Washington Post's Ezra Klein recently detailed, in early 2009 the American economy was not only in much worse shape than anyone imagined; it was literally on the brink of collapse. As The Economist explained the run-up to the passage of the $787 billion recovery program:

The White House looked at the economic situation, sized up Congress, and took its shot. Unfortunately, the situation was far more dire than anyone in the administration or in Congress supposed.
Output in the third and fourth quarters fell by 3.7% and 8.9%, respectively, not at 0.5% and 3.8% as believed at the time. Employment was also falling much faster than estimated. Some 820,000 jobs were lost in January, rather than the 598,000 then reported. In the three months prior to the passage of stimulus, the economy cut loose 2.2m workers, not 1.8m. In January, total employment was already 1m workers below the level shown in the official data.

As Klein summed it up two months ago:

The reality has been worse than the administration's nightmare scenario. Even with the stimulus, unemployment shot past 10 percent in 2009.
To understand how the administration got it so wrong, we need to look at the data it was looking at.
The Bureau of Economic Analysis, the agency charged with measuring the size and growth of the U.S. economy, initially projected that the economy shrank at an annual rate of 3.8 percent in the last quarter of 2008. Months later, the bureau almost doubled that estimate, saying the number was 6.2 percent. Then it was revised to 6.3 percent. But it wasn't until this year that the actual number was revealed: 8.9 percent. That makes it one of the worst quarters in American history. Bernstein and Romer knew in 2008 that the economy had sustained a tough blow; t hey didn't know that it had been run over by a truck.

Just how big a truck is reflected in these charts from the Center on Budget and Policy Priorities. The contraction of the U.S. economy was far more severe than the January 2009 chart from the BBC above reflected:

And to be sure, the actual explosion in unemployment dwarfed anything Team Obama imagined as they took over the ship of state.

In its chart pack for "The Legacy of the Great Recession," CBPP showed what a more realistic assessment of the economy and the American Recovery and Reinvestment Act should have looked like. As CBPP explained, those graphs reveal "how deep a hole the recession created - and how much deeper that hole would have been without the financial stabilization and fiscal stimulus policies enacted in late 2008 and early 2009."

Alas, the damage to the U.S. economy and President Obama's political prospects was already done. As Paul Krugman presciently warned on January 6, 2009:

I see the following scenario: a weak stimulus plan, perhaps even weaker than what we're talking about now, is crafted to win those extra GOP votes. The plan limits the rise in unemployment, but things are still pretty bad, with the rate peaking at something like 9 percent and coming down only slowly. And then Mitch McConnell says "See, government spending doesn't work."

(In October of that year, Krugman updated his grim assessment. "I went back to my first blog post -- January 6, 2009 -- worrying that the Obama economic plan was too cautious...Alas, I didn't have it wrong -- except that unemployment will, if we're lucky, peak around 10 percent, not 9.")
All of which leaves Barack Obama answering questions like this one from Steve Kroft of CBS 60 Minutes on Sunday. "There's a general perception that the stimulus was not enough," Kraft said, "That it really didn't work." Obama responded:

"Let me stop you there, Steve. First of all, there's not a general perception that the stimulus didn't work. You've got John McCain's former economist and a whole series of prominent economists, who say that it created or saved three million jobs and prevented us from goin' into a Great Depression. That works. So that's not true."

On this point, President Obama is correct. But the perception problem, aided and abetted by myth-making and misinformation from his Republican opponents, remains. And in large part, it's because when Barack Obama took over the stewardship of the U.S. economy, neither he nor most of the American government, knew just "how bad it really was."