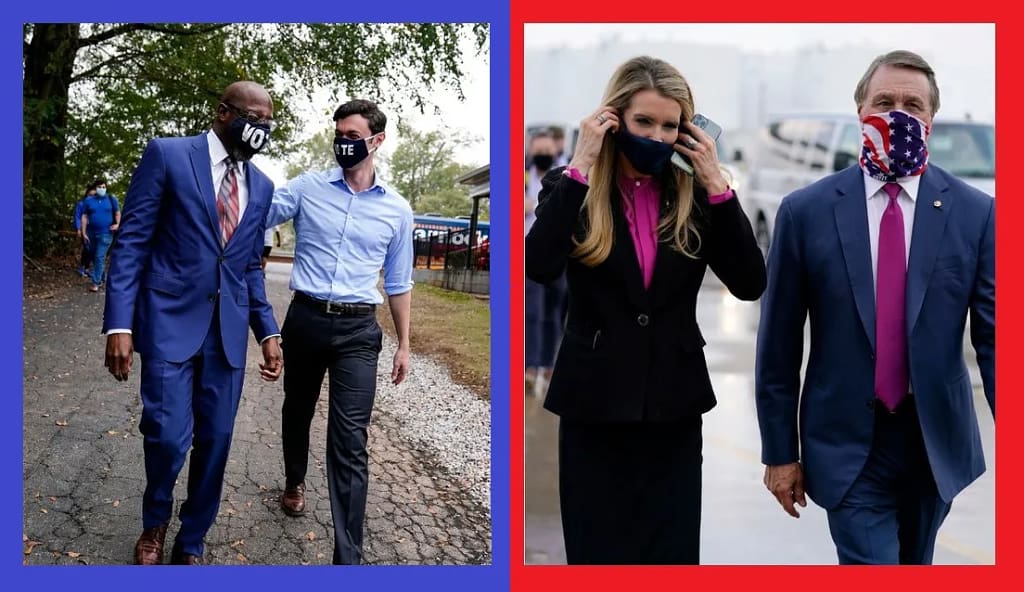 As the twin run-off elections in Georgia reach their climax on Tuesday, one can’t help but feel that history is being made. Again. One hundred sixty years after the election of Abraham Lincoln, a blue army is once again on the march.

In a very real sense, Democrats Raphael Warnock and Jon Ossoff represent the future of the Peach State. With the ever-expanding Atlanta region at its heart, Georgia is getting younger, more diverse, better educated and increasingly tied to the global economy. Theirs is a politics of optimism that embraces both a changing Georgia and the growing electoral power of its black residents.

But in Senators David Perdue and Kelly Loeffler, Republicans are offering a grim reminder that the old times there are truly not forgotten. While Perdue mocks the name of America’s first black Vice President-elect, his fellow COVID profiteer Loeffler poses with white supremacists and slanders the Black Church as home to “radicals” who want to “destroy America.” And as outgoing President Donald Trump turns to extralegal and unconstitutional means to hold onto power in Washington, Loeffler and Perdue pledged their support for his patently baseless demands to disenfranchise voters—overwhelmingly black voters--in places like Milwaukee, Philadelphia, Detroit and Atlanta.

There is nothing new or mysterious in this story. Americans should already know it. After all, Georgia and all of America lived through it before. Or to be more accurate, never stopped living through it. As President John F. Kennedy described it in 1963:

We are confronted primarily with a moral issue. It is as old as the scriptures and is as clear as the American Constitution.

The issue is this: 160 years after the election of Abraham Lincoln, the leading lights of a political party dominated by Southerners refuse to accept the results of a presidential election they lost. Still unwilling to accommodate or even acknowledge as legitimate the growing political power of black Americans, the Party of Lincoln simply will not respect the will of the voters. Instead, these 21st century traitors are turning to the weapons of disinformation and sedition to declare war on the United States Constitution.

Even as voters go to the polls today, in the nation’s capital 140 GOP Representatives and a dozen Republican Senators are preparing to object to Democrat Joe Biden’s clear and untainted victory in the Electoral College. Senators Perdue and Loeffler didn’t merely declare their support for the GOP’s attempted subversion of the Constitution; they called for the resignation of Georgia GOP Secretary of State Brad Raffensperger for having the temerity to certify the state’s election outcome. (For his part, Perdue called the leak of Trump’s “find me 11,000 votes” call to Raffensperger “disgusting.” As the saying goes, it was worse than a crime; it was a mistake.)  Rather than see Donald Trump lose an election, Georgia’s millionaire Republican Senators would happily shred the ballots of their own constituents and so betray their oaths to protect and defend the Constitution of the United States.

On March 4, 1861, President Abraham Lincoln in his First Inaugural warned the nation of precisely this threat and upon whom responsibility would rest for the consequences:

In your hands, my dissatisfied fellow-countrymen, and not in mine, is the momentous issue of civil war. The Government will not assail you. You can have no conflict without being yourselves the aggressors. You have no oath registered in heaven to destroy the Government, while I shall have the most solemn one to “preserve, protect, and defend it."

In his Second Inaugural just weeks before his assassination in 1865, the 16th President recapped the roots of the traitors’ cause:

On the occasion corresponding to this four years ago all thoughts were anxiously directed to an impending civil war. All dreaded it ~ all sought to avert it. While the inaugural address was being delivered from this place devoted altogether to saving the Union without war insurgent agents were in the city seeking to destroy it without war ~ seeking to dissolve the Union and divide effects by negotiation. Both parties deprecated war but one of them would make war rather than let the nation survive, and the other would accept war rather than let it perish. And the war came.

One eighth of the whole population were colored slaves not distributed generally over the union but localized in the southern part of it. These slaves constituted a peculiar and powerful interest. All knew that this interest was somehow the cause of the war. To strengthen perpetuate and extend this interest was the object for which the insurgents would rend the Union even by war while the government claimed no right to do more than to restrict the territorial enlargement of it.

Fast forward to today’s Georgia Senate race and it is the Confederates’ 21st century fellow travelers pretending to be the nation’s defenders. Loeffler wasn’t content to merely bash Reverend Warnock as a “radical liberal.” She proclaimed, “I’m not going to be lectured by someone who uses the Bible to justify division.” Her fellow Coronavirus conman David Perdue says simply, “Win Georgia, save America.”

As to who America is being saved from, it is worth taking a trip down memory lane. In the fall of 1864, Abraham Lincoln, Ulysses S. Grant and William Tecumseh Sherman felt much the same way. Take the vital Confederate rail hub and manufacturing center at Atlanta, they knew, and the end of the Confederate resistance would become a matter of when, not if. The city’s fall on September 1 not only signaled the beginning of the end for the southern secessionists, it helped secure Lincoln’s reelection two months later.

But it wasn’t Sherman’s September 1 message to Lincoln that “Atlanta is ours, and fairly won” that is so revealing when it comes to Tuesday’s run-offs in Georgia. Instead, it was the exchange of letters between General Sherman and his Confederate counterpart, General John Bell Hood, regarding the fate of the city.

On September 7, Sherman wrote to Hood, proposing a two-day ceasefire in order to allow both armies to assist the remaining residents of Atlanta to relocate from the theater of continued fighting. But when Hood protested that “the unprecedented measure you propose transcends, in studied and ingenious cruelty, all acts ever before brought to my attention in the dark history of war,” General Sherman wasn’t having any of it. He didn’t merely remind Hood of similar demands for evacuation from other Confederate generals, but noted the care Union troops had provided refugees from the fighting in other states. As he explained to both Hood and the mayor of Atlanta on September 12:

We don't want your Negroes or your horses or your houses or your lands or anything you have, but we do want, and will have, a just obedience to the laws of the United States. That we will have, and if it involves the destruction of your improvements we cannot help it. You have heretofore read public sentiment in your newspapers that live by falsehood and excitement, and the quicker you seek for truth in other quarters the better for you. I repeat then that by the original compact of government the United States had certain rights in Georgia, which have never been relinquished and never will be.

A furious John Bell Hood wasted no time in replying that same day. And what Hood wrote echoes in Georgia and across America still:

You came into our country with your army avowedly for the purpose of subjugating free white men, women, and children, and not only intend to rule over them, but you make Negroes your allies and desire to place over us an inferior race, which we have raised from barbarism to its present position, which is the highest ever attained by that race in any country in all time. I must, therefore, decline to accept your statements in reference to your kindness toward the people of Atlanta, and your willingness to sacrifice everything for the peace and honor of the South, and refuse to be governed by your decision in regard to matters between myself, my country, and my God. You say, "let us fight it out like men." To this my reply is, for myself, and, I believe, for all the true men, aye, and women and children, in my country, we will fight you to the death. Better die a thousand deaths than submit to live under you or your Government and your Negro allies. [Emphasis mine.]

Afterwards, William Tecumseh Sherman put an end not only to their correspondence, but to Georgia as a base for sustaining the Confederacy. Cutting his army loose to head to Savannah and lay waste to everything in its path, Sherman promised Grant, “I can make this march, and I can make Georgia howl!” As for General John Bell Hood, he led his Confederate forces to disaster in Franklin, Tennessee.

As it turned out, Hood’s punishment for his treasonous rebellion against the United States was to have an army base in his home state of Texas named for him in 1942. Rather than force the military to rename it and several other bases dedicated to dead Confederates, President Trump vetoed the most recent $740 billion defense authorization. His veto was overridden 80 to 12 in the Senate. Georgia Senators David Perdue and Kelly Loeffler did not vote.

Whatever happens in Georgia today, two things are certain. Donald Trump like Jefferson Davis will lose his war against the United States Constitution. And in 2021 as in 1864, the good guys still wear blue.