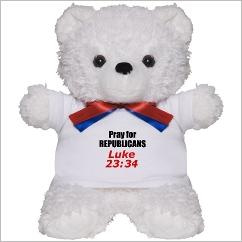 Just days after the shocking revelation that opponents of President Obama have been praying for his demise, another coded message in the form of Biblical verse has entered American political discourse. This time, however, the target of t-shirts, buttons, bumper stickers and signs is the Republican Party. And the meaning of "Pray for Republicans, Luke 23:34" isn't one of hate, but forgiveness.

Then Jesus said, "Forgive them Father, for they know not what they do."

The meaning of Jesus' words from the cross for the GOP faithful is apparently two-fold. First, with the Bush recession, a generation of fiscal recklessness (including a tripling of the national debt under Ronald Reagan and a doubling under George W. Bush), the massive transfer of wealth to the richest needing it least and the unnecessary war in Iraq, Republicans have condemned America to a future of economic insecurity and diminished global power. Compounding their sins is a politics of hate which divides Americans from each other, all in the name of power. Crucifying the American dream requires a lot of forgiveness.
But the citation of Luke 23:34 also expresses pity for the masses of the conservative movement, "for they know not what they do." And what they don't know is a lot.
Consider, for example, the Medicare program which serves 46 million American seniors. A recent poll revealed that 59% of conservatives and 62% of McCain voters did not believe that Medicare is a government program. (Their ignorance is amplified by short memories: furious Tea Baggers and raging Republicans appear to have forgotten the GOP's unfunded and deeply flawed 2003 Medicare drug plan which added hundreds of billions of dollars to the U.S. debt.)
They also know not what they do when it comes to taxes. As promised, President Obama in the $787 billion economic recovery program delivered tax cuts to 95% of American households. Displaying their fundamental misunderstanding of U.S. history and the American Revolution ("The first American Tea Party birthed a nation. The second American Tea Party could help save it!"), right-wing zealots are apparently outraged by no taxation with representation.
Then there is the myth-making about Barack Obama himself.
Echoing Birther banter about the President's supposed international conception, 58% of Republicans do not believe or are unsure if Obama was born in the United States. 17% of Republicans and 19% of white evangelicals insist the Obama the professed Christian is nonetheless a Muslim. In New Jersey, Public Policy Polling found that almost a third of the GOP faithful believe or aren't sure if Barack Obama is the Anti-Christ. It should come as no surprise that 52% of GOP voters believe that those agents of Satan from ACORN helped Obama steal 9.5 million ballots to win the 2008 presidential election.
To be sure, Republicans don't know a lot about the economy. If they did, they'd acknowledge that when it comes to job creation, GDP, stock market performance and just about any other indicator of the health of American capitalism, the economy almost always does better under Democratic presidents.
Conservative delusions are even more profound when it comes to health care. While Sarah Palin's adherents chant psalms about nonexistent death panels, the revealed truth is that health care remains worst where Republicans poll best. As the Commonwealth Fund and United Health Foundation showed this year, red states won by George W. Bush and John McCain have both the unhealthiest residents and worst health care systems. (Ironically, health care's willing executioners in the reddest of states would have their insurance paid for in part by blue state taxpayers.)
This know-nothingism of Biblical proportions is made worst by a failure to grasp basic mathematics. In September, right-wing activists aided by Fox News claimed that the 70,000 Tea Baggers who descended on Washington were in fact a crowd of 2,000,000. With his laughably inflated numbers, FreedomWorks president Matt Kibbe made a mockery of Jesus' miracle of feeding 5,000 people with five loaves of bread and two fishes. As Nate Silver concluded, Kibbe instead "did the equivalent of telling people that his penis is 53 inches long."
And finally, there is the Republican war on science. While many Americans join Sarah Palin and Mike Huckabee in rejecting the theory of evolution, only the most die-hard Republicans profess belief in Oklahoma Senator James Inhofe's famous proclamation that global warming is "the greatest hoax ever perpetrated on the American people." Of course, from evolution and climate change to abortion and abstinence policies and so much more, the politicization of science has been an essential GOP strategy for decades. It's no wonder a recent Pew Research Center found that only 6% of American scientists identify themselves as Republicans.
At the end of the day, for liberals following Christ's guidance and plea for forgiveness in Luke 23:24 can find it challenging, to say the least. After all, in their Conservative Bible Project dedicated to highlighting that "liberal bias has become the single biggest distortion in modern Bible translations," the right-wing collaborators branded Christ's message in Luke a "liberal corruption" and a "liberal falsehood."
In Matthew 5:44, Jesus in the Sermon on the Mount announces:

"But I tell you: Love your enemies and pray for those who persecute you."

In these days of bitter partisanship and none-too-thinly veiled death threats from the right, Christ's words of love, forgiveness and turning the other cheek should be taken to heart. And not put on a bumper sticker or a teddy bear.