Republicans Betray Their Gray-Haired Base with Trumpcare

Ever since Donald Trump's shocking victory on Election Day, press, pundits, and pollsters have engaged in a furious debate about which voters propelled him to the White House. Was Trump's win the revenge of the "guns and bitter crowd" in the Rust Belt, the white working-class voters whose racism, xenophobia and/or "economic anxiety" led them to pull the lever in 2016 for the reality TV star? Or was the Republican's core support throughout the primaries and the general election made up of more affluent and suburban backers? And as Trump's approval ratings continue to spiral downward to levels not seen since George W. Bush ambled out of the Oval Office, can he continue to count on an unshakeable "floor" of 35 to 40 percent support?
While these are all interesting questions, one thing is certain. Donald Trump, like Republicans nationwide over the past decade, has enjoyed the steadfast support of older voters. Since 2008, Americans (especially white Americans) over the age of 50 have reliably rallied behind GOP candidates. But under the American Health Care Act (AHCA) Majority Leader Mitch McConnell is now trying to sneak through the Senate, it will be the gray and the graying who suffer the most. 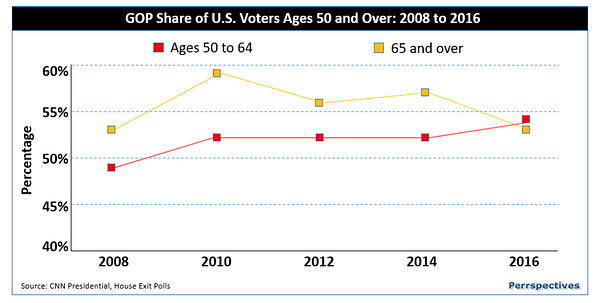 To fully measure the magnitude of the coming Republican betrayal of older voters with the AHCA (a.k.a. Trumpcare), it helps to first appreciate their recent loyalty to the GOP. As the charts of exit poll data since 2008 above show, Americans over age 50 show up to vote and vote for Republicans. During presidential election years, voters ages 50 to 64 and over 64 combined have represented between 42 and 46 percent of the electorate. But in the 2010 and 2014 midterm balloting, their share reached a staggering 53 and 55 percent. While John McCain narrowly lost 50- to 64-year-olds by one point in 2008, Mitt Romney and Donald Trump had no difficulty winning voters over age 50 in 2012 and 2016.
The American Health Care Act is their reward for their loyalty. It's a loyalty expected by the GOP and (as we've learned) demanded by Donald Trump.
Continue reading at Daily Kos.