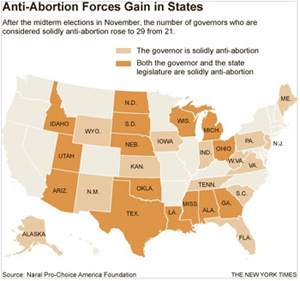 During his 2004 campaign, Oklahoma Republican Senator Tom Coburn declared, "I favor the death penalty for abortionists." Four years later, vice presidential candidate Sarah Palin famously refused to condemn an abortion clinic bomber as a "terrorist." Last week, a GOP mayoral candidate in Jacksonville joked that bombing an abortion clinic "may cross my mind." Now, deadly serious Republican lawmakers in Nebraska and Iowa are pushing legislation that would in essence legalize the murder of abortion providers.
Less than two years after the assassination of Dr. George Tiller and less than two weeks after South Dakota Republicans shelved a similar bill, Nebraska state Senator Mark Christensen has introduced an even more onerous version in LB 232. As Mother Jones explained:

Unlike its South Dakota counterpart, which would have allowed only a pregnant woman, her husband, her parents, or her children to commit "justifiable homicide" in defense of her fetus, the Nebraska bill would apply to any third party.
"In short, this bill authorizes and protects vigilantes, and that's something that's unprecedented in our society," Melissa Grant of Planned Parenthood of the Heartland told the Nebraska legislature's judiciary committee on Wednesday. Specifically, she warned, it could be used to target Planned Parenthood's patients and personnel. Also testifying in opposition to the bill was David Baker, the deputy chief executive officer of the Omaha police department, who said, "We share the same fears...that this could be used to incite violence against abortion providers."

Meanwhile in Iowa, two new measures backed by House Republicans could together enable "the justifiable use of force against abortion or family planning providers." In violation of the Supreme Court's Roe v Wade ruling, House File 153 would ban abortion by mandating the state must protect "life" from the moment of conception. House File 7 would provide civil and criminal immunity for citizens using "reasonable force, including deadly force, to protect themselves or a third party from serious injury or death or to prevent the commission of a forcible felony." Together, the Iowa Independent explained, the two bills could enable the very kind of necessity defense for anti-abortion terrorists a Kansas judge rejected for Tiller murderer Scott Roeder:

If passed into law, the two bills -- House File 7 and House File 153 -- would offer an unprecedented defense opportunity to individuals who stand accused of killing such providers, according to a former prosecutor and law professor at the University of Kansas, and are something that might have very well led to a different outcome in the Kansas trial of the man who shot Dr. George Tiller in a church foyer.

If terrorism is defined as "as the deliberate murder of civilians or destruction of property in order to achieve a political objective," the wave of attacks on American abortion providers certainly qualifies. After the 2003 capture of Atlanta Olympic Park and Birmingham family planning clinic bomber Eric Rudolph, then Attorney General John Ashcroft agreed, announcing "this sends a clear message that we will never cease in our efforts to hunt down all terrorists, foreign or domestic, and stop them from harming the innocent."
Shelley Shannon, one of the nation's most notorious anti-abortion extremists, agreed with Ashcroft. In 1993, Shannon was sentenced to 10 years in a Kansas prison for shooting Dr. Tiller in both arms outside his clinic. Two years later, Shannon pled guilty to setting fires to abortion clinics in Idaho, Nevada, Oregon and California. And as the New York Times recounted in 1995, Shannon was quite clear as to whether she considered her crimes terrorism:

Handcuffed and nondescript in jailhouse blues, Shelley Shannon, a housewife from rural Oregon, stood before a Federal judge here on June 7 and admitted waging a terrorism campaign against abortion clinics and doctors.

Asked in 2008 by NBC's Brian Williams if "an abortion clinic bomber a terrorist, under this definition, governor," Sarah Palin said no. While denouncing such violence as "unacceptable," Palin instead argued, "I don't know if you're going to use the word terrorist there."
Now in Iowa and Nebraska, some of her GOP colleagues apparently have a different word for the likes of Rudolph, Shannon, Roeder, and James Kopp: hero.
Mercifully, neither the Iowa nor the Nebraska effort to codify the intimidation of family planning providers is likely to become law as currently written. Christensen, the author of what might be deemed the Cornhusker Calamity, said that he's prepared to revise the legislation and "narrow it down to just protecting mother and unborn child." Then "it'll be noncontroversial and we'll be ready to go." In Iowa, the twin bills face an uncertain future in the state Senate.
Nevertheless, the Republican crusade against the reproductive rights of American women continues to gain momentum. While Republicans in Congress debate the redefinition of rape, defund Planned Parenthood and try to ban life-saving emergency room abortion procedures, emboldened GOP majorities in the states are putting draconian new abortion restrictions onto the books. Exceeding the harsh regulations in Mississippi, which now has one abortion clinic for the entire state, Virginia is set to pass a new law that would close at least 17 of its 21 clinics by forcing first-trimester abortion providers to offer the same medical facilities as hospitals. While Kentucky Republicans like their Texas counterparts are pushing a bill making it mandatory for patients to view an ultrasound image before undergoing an abortion procedure, several other states are planning to follow Nebraska's lead in passing so-called "fetal pain" laws. And while the Ohio GOP is pushing a "Heartbeat bill" would prohibiting women from ending their pregnancies after the "first discernible heartbeat," Georgia legislator Bobby Franklin seeks to prosecute - and execute - any woman who can't prove her miscarriage occurred naturally.
Only time will tell if these unprecedented assaults on the privacy and reproductive rights can withstand the political process and judicial scrutiny. But if some Republican lawmakers in some states get their way, the curse of anti-abortion terrorism will be redefined as a blessing.
(For more background, see The Washington Post for a summary of current state laws. ThinkProgress and the New York Times detail the myriad ways in which Republican state legislatures are trying to curb or eliminate Americans' reproductive rights.)