Republicans Were Against Ryan Plan Before They Were For It 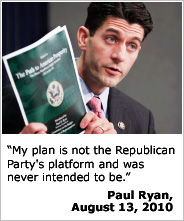 In a telling moment during the run-up to the midterm elections last fall, Congressman Paul Ryan declared of his proposed Roadmap for America's Future, "My plan is not the Republican Party's platform and was never intended to be." Not, it turned out, until after Election Day. Because while 235 House Republicans with Speaker John Boehner's enthusiastic support voted yesterday to kill Medicare, gut Medicaid and deliver yet another trillion dollar tax cut windfall to the wealthy, before November 2, 2010 they ran away in terror from Ryan's Roadmap.
That history was forgotten as all but four House Republicans rubber-stamped the draconian Ryan budget plan just days after its unveiling. The GOP's unity came despite the trepidations of some that the party that won its majority by scaring senior citizens was risking a backlash with its renewed commitment to kill Medicare. (Their fears are well-founded; recent polls from CBS and NBC each found that 76% of Americans opposed cuts to Medicare.) To stiffen the backbones in hi Republican caucus, Speaker Boehner offered a ringing endorsement of the Ryan plan:

"I fully support Paul Ryan's budget, including his efforts on Medicare."

Of course, it wasn't always this way. As it turns out, John Boehner's backing for the Ryan roadmap is inversely proportional to the distance to the next Election Day.
Before Paul Ryan authored this year's "Path to Prosperity" and last year's "Roadmap for America's Future," his version 1.0 was titled, "The Path to American Prosperity." And its publication was greeting with guffaws.
In March 2009, then House Minority Leader Boehner took offense at President Obama's claim that the GOP had no alternative budget proposal. As ThinkProgress recalled, Boehner brandished a 19 page glossy pamphlet and declared, "Well, that's not true because here it is, Mr. President." Sadly, as Boehner soon learned, that document had no numbers in it. Making matters worse, Paul Ryan chose April Fool's Day to roll out his detailed plan. Adding insult to injury, he admitted to MSNBC's Mika Brzezinsk that the previous week's brochure was a sham:

"What was released last week was more of a marketing document. Not a budget. This is our budget."

One that was quickly forgotten. Especially as the 2010 midterm elections got closer.

As you'll recall, the centerpiece of the Republicans' 2010 was an ad campaign to terrify the elderly about minor changes to Medicare Advantage affecting at most 15% of the overall program's 46 million beneficiaries. (That 137 House Republican voted in April 2009 for an "alternative budget" drafted by Ryan which called for "called for "replacing the traditional Medicare program with subsidies to help retirees enroll in private health care plans" was conveniently ignored.) RNC chairman Michael Steele even promoted a "Seniors' Bill of Rights" which declared:

"Let's agree in both parties that Congress should only consider health reform proposals that protect senior citizens. For starters, no cuts to Medicare to pay for another program. Zero."

That was tough to square with the Paul Ryan's plan to ration Medicare by ending guaranteed health insurance for the elderly and replacing it with under-funded vouchers to buy coverage in the much more expensive private market. Which is why the party last fall ran as far away as possible from Ryan's Roadmap for America before the actual voting took place.
In February 2010, then House Minority Leader John Boehner began distancing himself from Ryan's Roadmap, saying, "it's his." As the New York Times reported in July:

Representative John A. Boehner, Republican of Ohio, the minority leader, has praised Mr. Ryan but said the Roadmap would not be a part of the Republican agenda this fall.
"There are parts of it that are well done," Mr. Boehner told reporters last month. "Other parts I have some doubts about, in terms of how good the policy is."
In fact, only 13 House Republicans have signed on as co-sponsors, and Republican leaders, hoping for gains in the fall and, ultimately, in 2012, seem concerned at the possibility that the Roadmap may eventually become something candidates will be forced to take a position on. After all, what candidate wants to talk about major changes to Medicare and Social Security?

Which was exactly right. With its draconian spending cuts, Medicare rationing, tax cuts for the rich and Social Security privatization, a GOP platform based on Ryan's Roadmap would have been about as popular as the Ebola virus. As the Washington Post put it last summer:

Many Republican colleagues, who, even as they praise Ryan for his doggedness, privately consider the Roadmap a path to electoral disaster...
The discomfort some Republicans feel for Ryan's proposals goes beyond November. If Republicans were to take control of Congress next year, Ryan will rise to chairman of the Budget Committee. He could use the position to hold colleagues accountable for runaway budget deficits and make it more difficult for fellow Republicans -- and Democrats -- to stuff bills with expensive projects that add to the problem.

Even Ryan's closest political allies feared the blowback from his ideas. Last year, GOP representatives Eric Cantor (R-VA) and Kevin McCarthy (R-CA) joined in Ryan in publishing Young Guns. But even Ryan's co-authors were afraid to back his draconian plans. As ThinkProgress reported last August, Cantor repeatedly refused to endorse Ryan's Roadmap. As late as January, he could only muster, "I'm hopeful that we can get elements of what Paul is aiming for incorporated." As for his other co-author, in September McCarthy lied about what was in Ryan's plan - and their book, pretending, "No one has a proposal up to cut Social Security. It's about protecting it." (Social Security privatization is not part of the Republicans' current budget plans - at least not yet.)
For his part, Ryan in August acknowledged the GOP's past allergic reaction to his Roadmap. "While I am proud to have 13 House Republicans co-sponsor the legislation, and have been overwhelmed by the support outside the Beltway," he claimed, "my plan is not the Republican Party's platform and was never intended to be."
Of course, Paul Ryan's Roadmap for America was always intended to be the Republican Party's platform. Just not until after Election Day.