Perhaps the only joys in watching the Republican National Convention are the rich servings of irony. Served fresh in virtually GOP speech, these morsels of sweet revenge help slow my otherwise inexorably rising bile.
It is worth bearing in mind that the Republican platform calls for a ban on same-sex marriage and equates the rights of a fetus with those of its mother. The Texas GOP platform is particularly frightening, which "affirms that the United States of America is a Christian nation." This backdrop makes the following all the sweeter:

Sometimes, though, words just can't do irony (and hypocrisy) justice. Here are Rudy, Arnold and Jenna keeping it real: 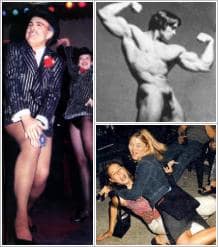