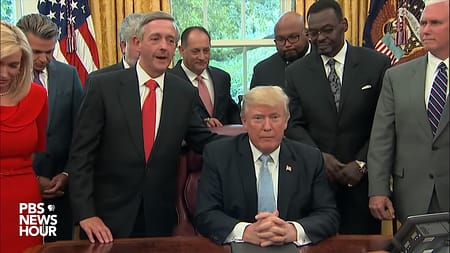 By now, Americans have grown accustomed to incendiary rhetoric from the raging right. Nevertheless, the past week witnessed some truly explosive eruptions from some of the leading lights of the conservative movement. Last Sunday, Donald Trump warned that his impeachment and removal from office could trigger a second civil war. Three days later, frequent Fox News flame-thrower Todd Starnes lost his longtime gig with the network after an episode of his radio show that advanced the theory that Democrats worship the Old Testament pagan god Moloch, who allowed for child sacrifice.
But in neither case were the slanders and threats original. The savage sound bites Trump and Starnes circulated to the world weren't the handiwork of press secretaries or the focus group-tested talking points of a Karl Rove or Frank Luntz. No, these abominations were the dirty work of a supposed man of God, Pastor Robert Jeffress. Jeffress isn't merely the pastor of the 13,000-member First Baptist Church in Dallas. As it turns out, the radio show host, Fox News contributor, and White House regular may well now be the President's go-to culture warrior. When it comes to the people and policies the MAGA crowd detests the most, Robert Jeffress is Donald Trump's minister of hate.
Continue reading at Daily Kos.