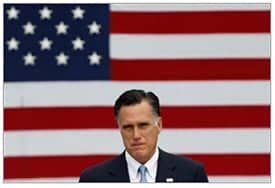 When it comes to touting bogus presidential endorsements by foreign leaders, candidate George W. Bush is in a class by himself. But while Governor Bush was (easily) duped by a Canadian comedy show into proudly accepting the backing of mythical Prime Minister Jean Poutine, Mitt Romney's misrepresentation of his private conversation with actual Australian foreign minister Bob Carr was willful. Willful, that is, doubly embarrassing. After all, Australian officials didn't merely reject Romney's boasting that Carr endorsed his critique of President Obama. As it turns out, Mitt Romney has consistently opposed that "one budget deal" which would supposedly end "all talk of America being in decline."
As TPM explained, Foreign Minister Carr is a member of the Labor Party, and thus an unlikely Romney ally. But what the Financial Times deemed a "minor diplomatic incident" stemmed from Romney's political malpractice with Carr's private remarks. As Romney claimed at a fundraiser Sunday night:

"I met today with the foreign minister of Australia. He said something, and I said 'Can I quote you?' and he said yes," Romney told fundraiser attendees, according to the pool report. "He said 'America is just one budget deal away from ending all talk of America being in decline.'"

But Romney's suggestions that somehow Carr was echoing the Republican's attack on President Obama as leading "an America in decline" and that Mitt was the man to provide "real leadership" to avoid that fate quickly ran into trouble from the Australians:

Senator Carr had previously made the same remark in April during a speech at a Washington think tank.
A spokesman yesterday said Mr Romney's interpretation was not correct.
''Senator Carr was arguing the case that America's economy is stronger than it is given credit for,'' he said. He said the Foreign Minister had offered the same diagnosis to World Bank chief, Bob Zoellick.

Of course, there's one other small problem for Romney's boasting about that "one budget deal away from banishing the notion of American declinism": Mitt is against it.
The GOP front-runner has made it quite clear he was opposed to what Carr in April called "an exercise of statesmanship." As Steve Benen recalled, Romney during an August GOP presidential debate joined all of the assembled Republican candidates in rejecting a budget deal featuring a ratio of $10 in spending cuts for each dollar in new taxes:

[Fox News anchor Bret] Baier phrased it this way: "I'm going to ask a question to everyone here on the stage. Say you had a deal, a real spending cuts deal, 10-to-1, as Byron said, spending cuts to tax increases.... Who on this stage would walk away from that deal? Can you raise your hand if you feel so strongly about not raising taxes, you'd walk away on the 10-to-1 deal?"
All eight candidates raised their hand. Literally all of them, if offered a debt-reduction deal that's 10-to-1 in their favor, would simply refuse.

"As president, my plan would have produced a budget that was cut, capped and balanced - not one that opens the door to higher taxes and puts defense cuts on the table...I personally cannot support this deal."

Romney may have been playing to the Republican Tea Party base, but he was also lying. Not only does his plan not balance the budget, it adds trillion more to the national debt than would President Obama.
As it turns out, Romney's scheme to "Cut, Cap and Balance" the federal budget does nothing of the sort. As the Washington Post explained in its discussion of an analysis by the Committee for a Responsible Federal Budget, "until the campaign offers a more specific plan, Budget Watch analysts said Romney's entire framework would add about $2.6 trillion to the debt by 2021." 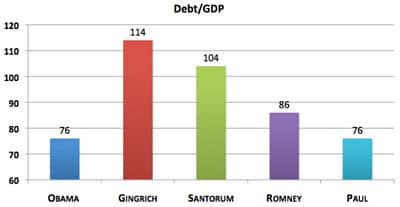 Romney's claim that his plan would promote job and economic growth while reducing the deficit is also likely false. The Bush tax cuts were promoted under the same guise, only to blow a $2.5-trillion hole in the federal budget that was accompanied by worst performance of any post-war expansion" for growth in investment, GDP, and job creation. Romney's tax cuts are even more expensive, clocking in at a cost of more than $10.7 trillion over the next decade and reducing revenue to a paltry 15 percent of GDP, according to Linden. Balancing the budget on those terms, as Romney claims he will do, would be next to impossible.

Impossible, Ezra Klein points out, because "Mitt Romney is promising that taxes will go down, defense spending will go up, and old-people programs won't change for this generation of retirees." But even with his shocking cuts to Medicaid, Romney can't get anywhere near balancing the budget unless he eliminates some of the deductions for workers, families and businesses that cost Uncle Sam over $1 trillion a year. And like Paul Ryan, the certain Republican presidential nominee is too cowardly to say what they are.
Earlier this year, his economic adviser Glenn Hubbard admitted Romney's cowardice, explaining "it is not his intention to take on any specific deduction or exclusion and eliminate it." Just two weeks later, Mitt Romney concluded discretion was the better part of valor and refused to reveal which deductions and tax breaks he would end:

"So I haven't laid out all of the details about how we're going to deal with each deduction, so I think it's kind of interesting for the groups to try and score it, because frankly it can't be scored, because those kinds of details will have to be worked out with Congress, and we have a wide array of options."

In response, the Post's Klein could only shake his head:

"Let's be clear on this: A tax plan that can't be scored because it doesn't include sufficient details is not a plan. It's a gesture towards a plan, or a statement of intended direction, or perhaps an unusually wonky daydream. But it's not a plan."

Certainly not a plan endorsed by Australian Foreign Minister Bob Carr. Or, for that matter, Canadian Prime Minister Jean Poutine.