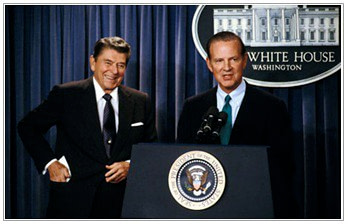 From the beginning, Mitt Romney's much-hyped overseas journey has devolved into one self-inflicted wound after another. But largely lost in the laughter is another episode which to Romney's right-wing allies is no laughing matter at all.
On the eve of the trip, Romney quoted former Reagan chief-of-staff James Baker, who claimed that early on in the White House The Gipper told him, "I want no more national-security meetings over the next 100 days-all of our time has to be focused on getting our economy going." For the likes of Bill Kristol and Marc Thiessen, Mitt's tale doesn't merely suggest that the sainted Reagan was AWOL on national security matters, but that war in Afghanistan, tensions with Iran, carnage in Syria, and other global issues wont merit President Romney's attention. That was bad enough on the eve of candidate Romney's international tour designed to pad his foreign resume. But given Baker's infamous message to "f**k the Jews," Romney isn't making his current pandering in Israel any easier.
Last Monday, Washington Post columnist, American Enterprise Institute contributor and former Bush torture enthusiast Marc Thiessen reacted with alarm from a story in the Wall Street Journal that foreign policy "is hardly the campaign's dominant focus, given voters say they care most about the economy":

Mr. Romney made that clear at a July fundraiser in Montana as he rehashed the challenges Mr. Reagan faced when he took office. He recounted how [James] Baker, a former secretary of state, held a national security meeting about Latin America during the first 100 days of Mr. Reagan's presidency.
"And after the meeting, President Reagan called me in and said, 'I want no more national-security meetings over the next 100 days---all of our time has to be focused on getting our economy going,' " Mr. Romney recalled Mr. Baker saying.

For his part, Kristol was appalled, and not just because "I can't believe the story is true." But leaving aside the implications for Reagan's legacy, a man he insists "was a historic president in large part because of his national security accomplishments," Kristol fretted that "Romney's recounting this anecdote doesn't reflect well on Romney's understanding of the job he's campaigning for." Thiessen is worried:

The fact that Romney thinks it would be desirable to ignore the world for his first 100 days is troubling. Yes, the American people are focused on the economy - and understandably so. But Romney isn't running for treasury secretary - he is running for Commander in Chief. And those responsibilities begin on Day 1 of his presidency.

Or as Kristol put it, "With respect to the presidency, national security isn't a bug; it's a feature."
And for Republicans, lock-step support of Israel must be a feature of American foreign policy. As Mitt Romney expressed it during a Republican presidential debate, "I'd get on the phone to my friend Bibi Netanyahu and say, 'Would it help if I said this? What would you like me to do?'" Or as he put it in October, "The actions that I will take will be actions recommended and supported by Israeli leaders."
Sadly for Romney, that's not the approach James A. Baker followed as Secretary of State for President George H.W. Bush. As the CBC recalled:

In the early 1990s, when then president George H.W. Bush became annoyed at Shamir's refusal to stop building settlements, he cut off $10 billion in loan guarantees, which Israel needed to resettle Russian Jewish immigrants.
At the time, James Baker, Bush's secretary of state, publicly recited the White House switchboard's phone number, declaring to Israel: "When you are serious about peace, call us!"

For Team Mitt, that's hardly the most embarrassing chapter in the James Baker saga. As Slate reminded readers in 2002, the dust-up over the loan guarantees for Israeli settlements was just the beginning:

Then there was Secretary of State James Baker's infamous "fuck the Jews" remark. In a private conversation with a colleague about Israel, Baker reportedly uttered the vulgarity, noting that Jews "didn't vote for us anyway." This was more or less true--Bush got 27 percent of the Jewish vote, compared with 73 percent for Dukakis, in 1988. And thanks in part to Baker, it was even truer in 1992, when Bill Clinton got 78 percent of the Jewish vote and Bush got only 15 percent--the poorest showing by a Republican candidate since Barry Goldwater in 1964.

(It hasn't gotten any better since. And with good reason.)
All of which is a big problem for the ultra-hardliners among the Republican Party's Tea Party base. On Wednesday, the always execrable Debbie Schlussel protested, "James F-- The Jews' Baker now Romney foreign policy adviser (along w/ other Israel-haters)." Meanwhile, the Tea Party Tribune pleaded, "Governor Romney, despite the temptation, please be sure to place a good deal of distance between yourself and f' the Jews they don't vote for us anyway James Baker III."
Ultimately, the neocons need not worry. As Ari Berman documented in The Nation, the same people who brought you the war in Iraq dominate Mitt Romney's national security and foreign policy teams. Even though Baker was one of the big stars at Romney's "Republican rock concert" in Utah last month, Politico reported the same weekend that "Baker diverges from Romney on China, Russia, Afghanistan." And even if national security isn't on Mitt Romney's list of priorities, his visit to Israel shows that appealing to Jewish voters is.