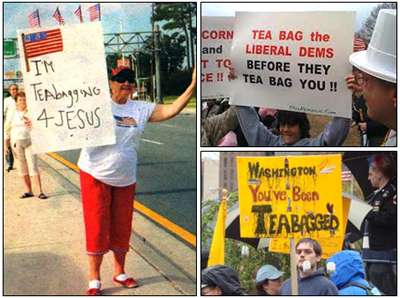 What better way to celebrate Thanksgiving than with a heat-warming story on good, old fashioned American capitalism. Texas teacher and Obamacare opponent Thomas Ritter, who wrote President Obama and accused him of liking to "make fun of tea-baggers," is selling the letter he received in response for $24,000. Given right-wing apoplexy over Obama's repetition of the same term, Ritter will doubtless find a willing buyer from the Koch suckers of the conservative movement.
As any Tea Party activist will attest, you've said a mouthful when you casually use the term "tea bagger." Nevertheless, Ritter told his President:

I hesitated to write for fear of some kind of retribution . . . I watched you make fun of tea baggers and your press secretary make fun of Ms. Palin which was especially beneath the dignity of the White House.

While Obama to his credit personally responded to Ritter's complaint, he unfortunately used the same offending term, or at least put his close quotes in the wrong place:

I...appreciate your concern about the toxic political environment right now. I do have to challenge you, though, on the notion that any citizen that disagrees with me has been 'targeted and ridiculed' or that I have "made fun" of tea baggers.

That slip of the tongue is unusual for a White House usually so careful to control everything that escapes the President's mouth. Then again, between the troubled Care Act launch, the Iran nuclear deal and the upcoming budget deadline, Obama is juggling a lot of balls right now. Besides, as he put it in April, "I'm not the strapping young Muslim socialist I used to be."