The Difference Between 2018 and the 2010 Midterms? The Truth

As the new year begins, press, pundits and politicians alike are saying 2018 could be the year of the "blue wave." Led by a historically unpopular first-year president and still smarting from embarrassing losses in Virginia and Alabama, many Republicans are talking out loud about "bloodbath" in next November's midterm elections. While Democrats are fielding challengers to incumbent Republicans in almost every congressional district, Senate Majority Leader Mitch McConnell (R-KY) is privately warning his colleagues the GOP could lose control of both the House and Senate. Retiring Pennsylvania Rep. Charlie Dent simply urged his fellow Republicans to "be prepared for the worst." 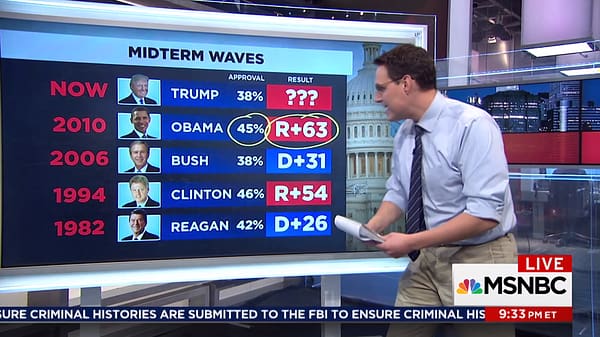 They have good reason to be afraid. Very afraid. Together, McConnell and House Speaker Paul Ryan (R-WI) presided over a series of legislative fiascos. Both their greatest failure (the effort to repeal Obamacare) and their greatest success (the year-end corporate tax cut package) were wildly unpopular. In the aftermath of their efforts to take health insurance away from between 13 and 32 million Americans, the Affordable Care Act now enjoys majority support. The massive, $1.5 trillion tax cut windfall for wealthy (also known as "Trump's Golden Showers") does little for working Americans even as it delivers 82 percent of its benefits in 2027 to the richest 1 percent of taxpayers. It's no wonder why in recent polling Democrats lead the generic congressional ballot by 10 to 18 points. On top of it all, the rapid-fire fabrications and the staggering incompetence of the president, the unprecedented corruption of his administration and the five Russia scandals* still under investigation by special prosecutor Robert Mueller have many wondering if the true loyalties of the Oval Office occupant lie with his bank accounts--and the Kremlin.
Republicans have one more reason to feel mildly nauseous heading into the 2018 midterms. After all, just 8 short years ago, the shoe was on the other foot. By November 2010, the GOP's "Red Tide" washed away the Democrats' majority in the House, as Republicans picked up a staggering 63 seats. McConnell's minions added six Republican senators in the 2010 midterms and would take over the chamber four years later. And Mitch McConnell, John Boehner and the Republican Party did it all without one great advantage Democrats hold today.
The truth.
That's right. In a colossal media failure perhaps exceeded only by the Iraq war and the election of Donald Trump itself, the GOP swept to power in 2010 despite misleading the nation on almost every major campaign issue of consequence. After all, Obamacare, signed into law on March 23, 2010, did not increase the national debt, represent a "government takeover of health care" which contained "death panels" or "stick it to seniors" with a "raid a Medicare." And far from being "Taxed Enough Already," Americans in 2009 and 2010 received the largest two-year tax cut in American history.
To fully understand the 2010 triumph of the most successful disinformation campaign in U.S. up to that time, it helps to start with not-so-immaculate conception of that great right-wing hissy fit, the tea party.