The Four Zombies of the Supply-Side Apocalypse 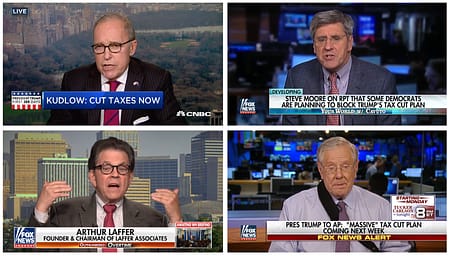 Zombies have gripped American popular culture for years. In books, television shows, and films, the undead are regularly resurrected for your entertainment. (Even Jane Austen fans were treated to Elizabeth Bennet and Mr. Darcy butchering those from beyond the grave in Pride and Prejudice and Zombies.) But whatever their reanimation story, the zombie's Achilles' heel is always the same: his or her head. That's why Fido encouraged the just-bereaved to decapitate their recently deceased loved ones and separately inter their noggins in a "head coffin." In the face of an onslaught of the living dead, 2003's The Zombie Survival Guide urged readers, "Use your head: cut off theirs."
But what if certain zombies were immune to that age-old strategy? Imagine instead that their heads were, to borrow a phrase from Captain Renault in Casablanca, their "least vulnerable spot"? What if decades of academic research and over 40 years of real-world experience proved unable to stop these talking dead from feasting on the American body politic while chanting in terrifying unison, "Tax cuts pay for themselves"?
Sadly, that grim nightmare is once again American reality. As Politico's Ben Schreckinger explained in a pathetically hagiographic profile this week, Arthur Laffer, Lawrence Kudlow, Stephen Moore, and Steve Forbes--the four zombies of the supply-side apocalypse--are back. And under Donald Trump, just as they did under Presidents Ronald Reagan and George W. Bush, these four mythmakers are once again engineering a massive tax cut windfall for the wealthy, while guaranteeing the United States Treasury hemorrhages red ink as far as the eye can see.
Continue reading at Daily Kos.