The Impeachment Letter Trump Could Have Sent to Nancy Pelosi 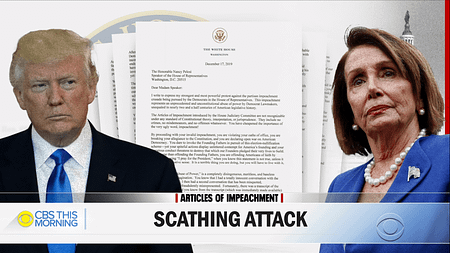 December 22, 2019
The Honorable Nancy Pelosi
Speaker of the House of Representatives
Washington, D.C. 20515
Dear Madam Speaker:
I wrote you this past Tuesday to protest in the strongest possible terms the partisan impeachment charade you and your Democrat conspirators were about to perpetrate in the House of Representatives. Nevertheless, you persisted. I have now joined Andrew Johnson and Bill Clinton in the ranks of impeachment infamy.
Now I would like to warn you not only about what is going to transpire, but why.
In a nutshell, I will be acquitted by the United States Senate. I would not be surprised if my GOP allies were unanimous in my exoneration. And while the Republicans on Capitol Hill will not abandon me, the ardor of my most fervent supporters will only be increased by my persecution. Seeing my victimhood as theirs, my MAGA base will turn out in massive numbers on Election Day 2020. All the while, the national media will predictably publish "both sides do it" stories with titles like "GOP, Dems Disagree on Merits of Impeachment Case" and "Impeachment's Impact on the 2020 Horse Race" and "Claiming 'He's Like Us,' Working Class Whites Vow to Support Trump 'to the End.'"
Why am I so confident about this course of events? Why am I so certain that elected Republicans in Washington and across the nation will never turn their backs on me? Simply because they will pay no political price for doing so.
There will be no price to be paid because we Republicans have already successfully rigged the system. The GOP now has the United States trapped in an unbreakable "Iron Triangle." Republican media, Republican voter suppression and unlimited Republican campaign cash together create an impregnable cage from which the objective truth and the will of the people are powerless to escape.
Continue reading at Daily Kos.