The Republican Betrayal of the Elderly Begins

Perhaps more than any other factor, the overwhelming Republican midterm triumph was fueled by the elderly. Voters 65 and over, the only age group to support John McCain in 2008, boosted their share of the turnout to 21% from 16% two years earlier. Nationwide, Republicans won seniors by a staggering 59% to 38%. But now, their reward is a slap in the face. After all, from trying to repeal health care reform and threatening to shutdown the government to proposals to privatize Social Security and Medicare, the new GOP majority is betraying the elderly Americans who put them in power.
The Republican treachery started within days of taking over the House. The same party that tried to kill Medicare in the 1960's and gut it in the 1990's swept to victory in 2010 by terrifying seniors about mythical cuts to their benefits supposedly part of the Democratic health care law. (In August 2009, Politifact found that "the core benefits of Medicare won't change.") But within days of grabbing the gavel, Speaker Boehner and his Republican caucus voted to repeal the Affordable Care Act, and with it, the benefits already delivered to the elderly in order to fill the infamous Medicare "donut hole."

Last year, in a step authorized under the Affordable Care Act (ACA), the government provided checks of $250 to Medicare beneficiaries who fell into the gap in prescription drug coverage known as the "donut hole." Richard Foster, the Chief Actuary for the Centers for Medicare and Medicaid Services, stated in a report published last week in The Hill newspaper that "in theory," the House-passed repeal bill would force seniors to return these checks.

If the Republicans had succeeded in their repeal effort, seniors' pain would not have ended there. A recent survey showed that 31% of Medicare recipients fall into the gap on drug coverage between $2,830 and $6,440. In 2011, ACA provides for half-price discounts for these gap prescriptions and by 2020, eliminates them altogether.
Thanks to the Democratic-controlled Senate, senior citizens won't have to cut Uncle Sam a $250 check this year. But in less than two weeks, their Social Security checks may also come to a halt, if Republicans have their way.
That's because just two days after House Majority Eric Cantor (R-VA) announced we ought to get [a government shutdown] off the table," Speaker Boehner virtually guaranteed one by insisting Thursday he is "not going to move any kind of short-term [spending bill] at current levels." Despite certain opposition from the Senate and a certain veto from President Obama, House Republicans nevertheless passed $61 billion in draconian spending cuts, cuts they demand in order to keep funding the federal government after March 4.
For his part, President Obama warned:

"This is not an abstraction," he said at his Tuesday news conference. "People don't get their Social Security checks. They don't get their veterans payments. Basic functions [are] shut down. And it would have an adverse effect on our economic recovery."

While Social Security checks did continue during the Republican government shutdown of 1995 and 1996, the Los Angeles Times noted that "many other Social Security services halted, including responses to requests for retirement and disability claims, address changes and Social Security numbers needed for work."
Even if a shutdown is averted, the House GOP budget slashes $1.7 billion from the Social Security program's administrative budget. And that, the agency warned last week, could lead to furloughs of Social Security workers responsible for the distribution of benefits.
But the bigger Republican threat to Social Security is longer term. Despite the obvious conclusion by Obama budget chief Jacob Lew that "Social Security does not contribute to the deficit in the medium term....There is no need to deal with Social Security, and dealing with it would have at best a negligible impact," Republicans remain committed to privatizing the program for future retirees.
Last week, Republicans leaders including Mitch McConnell, John Boehner and Paul Ryan criticized President Obama's proposed 2012 budget. McConnell, who voted against the creation of the deficit commission later authorized by executive order scoffed, "The President has offered an unserious budget that ignores the warnings of his own bipartisan deficit commission and chooses political expediency over real leadership." Paul Ryan, the House Budget Committee chairman and a member of the Bowles-Simpson commission who also voted against its recommendations, complained, "When his own commission put forward a set of fundamental entitlement and tax reforms, he ignored them."
Ryan's tough talk didn't end there. "We plan to step in the breach," Ryan declared, "And provide that kind of leadership by showing the country how we would do things different." 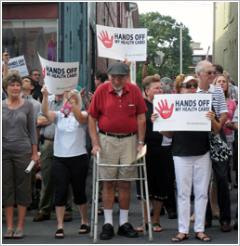 By different, Ryan and his Republican colleagues mean privatizing Social Security and rationing Medicare.
As TPM summarized the "slash and privatize" agenda in Ryan's Roadmap for America's Future:

Rep. Paul Ryan, (R-WI) the ranking Republican on the budget committee, recently detailed the Republican plan for Social Security that preserves the existing program for those 55 or older. For younger people the plan "offers the option of investing over one-third of their current Social Security taxes into personal retirement accounts, similar to the Thrift Savings Plan available to federal employees."

Future Medicare beneficiaries would receive a payment to apply to a list of Medicare-certified coverage options. The Medicare payment would grow every year, with additional support for those who have low incomes and higher health costs, and less government support for high-income beneficiaries. The most vulnerable seniors would also receive supplemental Medicaid coverage and continue to be eligible for Medicaid's long-term care benefit.

Sadly for the party which cried "death panels," Ryan proposal would necessarily lead to rationing. As it turns out, Paul Ryan admitted as much.
When Ryan unveiled his Roadmap back in February, as Ezra Klein, Matthew Yglesias and TPM all noted, privatization of Medicare was the centerpiece of his deficit reduction vision. But because the value of Ryan's vouchers fails to keep up with the out-of-control rise in premiums in the private health insurance market, America's elderly would be forced to pay more out of pocket or accept less coverage. The Washington Post's Klein described the inexorable Republican rationing of Medicare which would then ensue:

Ryan acknowledged as much. Sadly for the Republican brain trust, he failed to follow the GOP script that says only Democratic reforms lead to "health care denied, delayed and rationed."

(Of course, Ryan left out the real culprit - the private insurance market. But with 50 million uninsured, another 25 million underinsured, one in five American postponing needed care and medical costs driving over 60% of personal bankruptcies, Congressman Ryan is surely right that "rationing happens today.")
The specter of rationing at a time when the party was demagoguing Democrats over Medicare explains why Republicans ran away from Ryan's plan throughout the 2010 election. Last February, then House Minority Leader John Boehner began distancing himself from Ryan's Roadmap, saying, "It's his." In July, Boehner grumbled, "There are parts of it that are well done," adding, "Other parts I have some doubts about, in terms of how good the policy is." And with good reason. With its draconian spending cuts, Medicare rationing, tax cuts for the rich and Social Security privatization, a GOP platform based on Ryan's Roadmap would about as popular as the Ebola virus. As the Washington Post put it last summer:

Many Republican colleagues, who, even as they praise Ryan for his doggedness, privately consider the Roadmap a path to electoral disaster.

Even Ryan's closest political allies feared the blowback from his ideas. Last year, GOP representatives Eric Cantor (R-VA) and Kevin McCarthy (R-CA) joined in Ryan in publishing Young Guns. But even Ryan's co-authors are afraid to back his draconian plans. As ThinkProgress reported last August, Cantor repeatedly refused to endorse Ryan's Roadmap. Even a month ago, he could only muster, "I'm hopeful that we can get elements of what Paul is aiming for incorporated." As for his other co-author, in September McCarthy lied about what was in Ryan's plan - and their book, pretending "no one has a proposal up to cut Social Security. It's about protecting it."
But feeling emboldened after their victories last fall, the Republican brain trust is turning to Paul Ryan to architect a plan for America's senior citizens current and future. Declaring Republicans long silent about specifics would "be specific about bold reforms." Eric Cantor last week announced that Republicans "will be presenting at the end of next month, towards the beginning of April, our own budget, a serious document that will reflect the type of path we feel we should be taking to address the fiscal situation, including addressing entitlement reforms, unlike the president did in his budget." As for Speaker Boehner, he was quite clear about who would be writing those bold plans. As Politico noted:

When pressed if such reforms would include Social Security and Medicare, Boehner said he would "let Paul Ryan and the Budget Committee do their work. I have no doubt that all of these issues will be on the table."

That isn't be good news for America's seniors. Just a few months after backing the GOP with a gray-haired generation gap that ensured victory at the polls. Republicans are turning their backs on the elderly voters who elected them.