The Romney Recession vs. the Obama Boom

After campaigning for months on the long ago debunked slander that President Obama "made the economy worse," Mitt Romney is now promising voters a "big change" over the next four years. President Romney's change would be big, all right, just not in the way he is pledging. That's because while a growing number of analysts believe the United States could be poised for breakout economic expansion and job growth, Romney's toxic combination of draconian spending reductions, premature balanced budgets and regressive tax cuts is a formula for a new recession.
Of course, you'd never know that hearing Governor Romney's repeated boasts that as President he will create 12 million new jobs during his first term. But that figure is based on a triple deception. First, as the Washington Post's Glenn Kessler documented, Romney's 12 million figure is a fiction based on three studies of tax policy, energy and trade with China that estimate gains over 8 to 10 years. Romney's second deception is just as cynical. Forecasts this year from Moody's Analytics, Macroeconomic Advisers and the nonpartisan Congressional Budget Office already projected that based on recent trends and projected policy the U.S. economy will generate roughly 12 million jobs by 2016 anyway. But the Romney-Ryan plan isn't a continuation of President Obama's policies. And that difference makes all the difference between economic expansion and contraction. 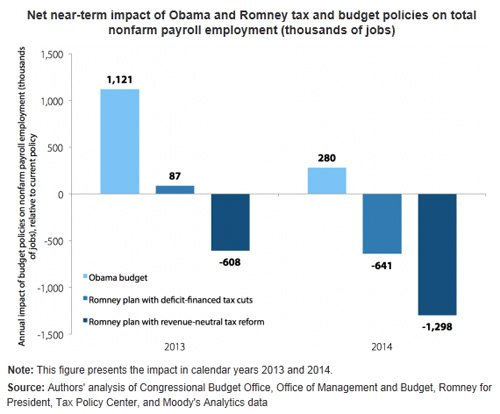 Last month, the Economic Policy Institute (EPI) examined the respective programs of candidates Obama and Romney to gauge their impacts on economic and job growth. EPI concluded that Romney's plan for a $5 trillion tax cut, $2 trillion in new defense spending, and steep reductions in Medicaid and non-defense discretionary spending would lead to job losses and slowing GDP. The Romney recession is more severe still if the Republican produces a revenue-neutral budget by ending tax loopholes, deductions and credits. (It is that formula which led the nonpartisan Tax Policy Center to conclude that the Romney plan would slash taxes for the top five percent of earners while raising them for everyone else.) The result?

Under this scenario, the Romney budget plan would on net decrease real GDP growth by 0.5 percentage points in 2013 and 1.1 percentage points in 2014. We project that employment would fall by 608,000 jobs in 2013 and roughly 1.3 million in 2014.9 Note that even if Romney's additional tax cuts were revenue neutral, his budget plan would add to the deficit in both 2013 and 2014, trading bigger deficits for fewer jobs.

As Nicholas Kristoff and Eduardo Porter each recently suggested in the New York Times, Americans need only (in Mitt Romney's words) "look to the capitals of Europe" to see how the Romney-Ryan plan will work out. The U.S. is outperforming the austerity economies of the UK, Germany and much of the continent. And while the 2 percent third quarter American growth rate is still modest, it is far cry from the other side of the Atlantic, where the IMF is forecasting contraction for next year. As Kristoff rightly concluded:

"If you want to see how Romney's economic policies would work out, take a look at Europe. And weep."

Paul Krugman isn't alone in predicting that a Romney victory in November could lead to a double-dip recession in 2013 "that simultaneously blows up the deficit and depresses the economy." Many leading economists predict that far from rescuing the middle class, Mitt Romney will only batter it further. Joel Prakken, chairman of economic forecasting firm Macroeconomic Advisers, rejected the notion that Mitt's 159-point plan would "reduce the unemployment rate from eight to five in two years." James Galbraith worried that" if applied, these fiscal measures would be utterly draconian" and "the attacks on Medicare and Social Security would throw large portions of the population into poverty." Mark Hopkins of Moody's Analytics stated that "on net, all of [Romney's] policies would do more harm in the short term," adding, "If we implemented all of his policies, it would push us deeper into recession and make the recovery slower." Nobel Prize-winning economist Joseph Stiglitz cautioned, "The Romney plan is going to slow down the economy, worsen the jobs deficit, and significantly increase the likelihood of a recession." It's now wonder global business leaders and The Economist's survey of American economists overwhelmingly prefer Barack Obama's stewardship of the American economy.
But the gloomy picture of a Romney recession need not come to pass. By sticking with the current occupant of the Oval Office, Americans could see the Obama recovery turn into the Obama boom.
That's the message coming from a growing chorus of voices, including Michael Tomasky, Greg Ip and Roger Altman. It's not just that corporate profits are at near-record levels, Americans' debt has dropped sharply and that pent-up consumer demand is slowly returning. In addition, Tomasky pointed out, "The Federal Reserve is now seemingly committed to low interest rates and fiscal stimulus well into the future." And as Altman summed it up, the headwinds from the 2008 financial collapse are beginning to abate:

When they do, it is possible that the US economy will surprise on the upside. A housing revival, the revolution occurring in energy, a rejuvenated banking system and a leaner industrial base could lead to US growth beyond the 2.5 per cent rate that is widely seen as its long-term potential. In other words, the famine could be followed by a feast.

Thanks in part to President Obama's rescue of the U.S. industry (which saved over a million jobs), the 2009 stimulus (which the CBO concluded at its peak added 3.3 million jobs, cut unemployment by as much as 1.8 percent and boosted GDP by up to 4.1 percent) and other measures designed to double U.S. exports, the American manufacturing sector is rebounding from its shocking contraction of the Bush years. According to a recent forecast by the Boston Consulting Group, the U.S. economy fueled by increasing productivity and lower U.S. energy prices could add up to five million new manufacturing jobs by 2020. That productivity advantage and the American boom in natural gas and oil production, is giving the U.S. advantages that Europe and even China will be hard-pressed to match.
Ironically, the beneficiary of all these trends could be Mitt Romney. As Ip explained:

Cast your mind forward to October 2014. The economic rebound for which Barack Obama had worked so hard and hoped so long is finally underway: Growth is humming, unemployment is steadily dropping, and the stock market is hitting one record high after another. But unfortunately for Obama, he's not in the White House anymore -- and President Mitt Romney is the man whose approval ratings are being carried aloft by the Dow.

Even in the face of crisis in Europe and the need to resolve the so-called fiscal cliff here, that's seems like a very plausible scenario. But that scenario only seems likely if a future President Romney acts like the current President Obama is now. Because if Romney does in the White House what he's promising voters on the campaign trail, the outcome could be substantially different. The difference, that is, between an Obama boom and the Romney recession.