The Simple, Sinister Reason for the GOP's Never-ending War on Obamacare 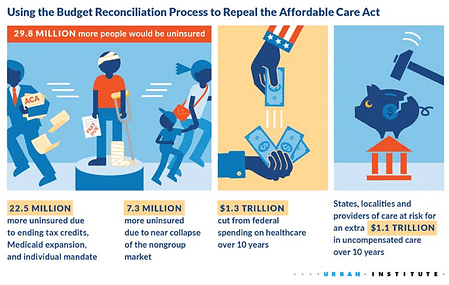 House and Senate Republicans this week took the first step this week towards the repeal of the Patient Protection and Affordable Care Act, also known as Obamacare. But without a replacement program in place, the GOP is nevertheless prepared to withdraw health insurance from up to 30 million Americans and jeopardize coverage for over 20 million more. While millions will face the prospect of financial ruin, Republicans will condemn tens of thousands of the newly uninsured to needless deaths--every year. Meanwhile, many hospitals, physicians and insurers will be trapped in a market "death spiral" Republicans alone will be responsible for creating. If President Trump, Mitch McConnell and Paul Ryan succeed, theirs will be the greatest act of political spite in American history.
The question is why. This isn't about a "better way" to enable health care for all; Republicans don't have any way, period. The demolition of the ACA isn't about "freedom" or "choice," either; by providing coverage and protecting Americans from the worst depredations of the insurance industry, Obamacare enhances personal freedom. (For those decrying insurance mandates, think again about your payroll taxes which help buy you a retirement pension and old-age health care.) And to be sure, the GOP isn't upholding the sanctity of the "free market"; the ACA has brought millions of new customers to private insurers, private hospitals, private physicians and private pharmaceutical firms.
The answer is simple, sinister and no different now than when Bill Clinton first took the oath of office 24 years ago. As I first explained on "The Real Reason for the GOP's All-Out War on Obamacare" on August 11, 2013, Republicans have never feared that Democratic health care reform would fail, but that it would succeed.
Continue reading here.