The tumultuous events of the past week have led to a complete shake-up of the Top 10 GOP Sound Bites. Rumored plans for military strikes against Iran, revelations regarding President Bush's authorization to leak classified national security information to target political foes and the resignation of Tom Delay have combined to send some newcomers up the rankings and drop some old favorites off the charts.
Rocketing to number one is the thrash metal "Wild Speculation (Fantasy Land)" by George Bush and Donald Rumsfeld. Coming in a close second is the poetic and heartfelt ballad by Scott McClellan and President Bush, "(Leaking Is In) The Public Interest." Holding its ground at #3 is "Ongoing Investigation" from the White House platinum release, "PlameGame", while the previous #1, "Terrorist Surveillance Program" dropped to fourth. 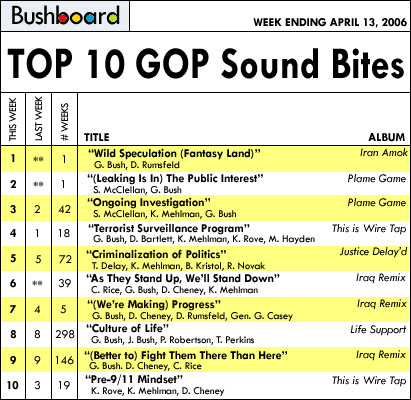 Falling off the charts this week are some Republican oldie but goodies. After 200 weeks on the Bushboard Top 10, Condi Rice's 2002 chart-topper "Smoking Gun, Mushroom Cloud" fell out of the rankings. And for the first time since 2000, George Bush's poignant NCLB ballad, "Soft Bigotry of Low Expectations" didn't crack the Top 10.
To view an archive of previous Top 10 GOP Sound Bites lists, visit the Perrspectives Image Gallery.