As 2006 comes to a close, the Top 10 GOP Sound Bites chart has been turned upside down. In the wake of the Republicans' midterm election nightmare and the battering of the Iraq Study Group report, a bevy of GOP favorites have fallen off the list. 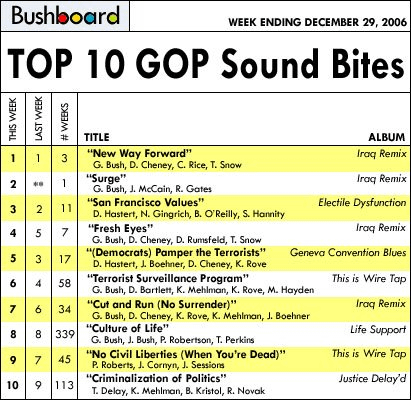 Nowhere is the shake-up more evident than in the declining fortunes of the Republicans' Iraq Remix LP. Smash hits with a great beat you could dance to like George Bush's thumping "Stay the Course" and Tony Snow's haunting "Adapting to Win" are gone from the charts altogether. While the RNC classic "Cut and Run (No Surrender)" is still hanging on at #7, newer melancholy tunes from the President's team, including "New Way Forward" (#1), "Surge" (#2) and "Fresh Eyes" (#4) now top the charts.
The pre-election ditty from Dennis Hastert and his friends at Fox News, "San Francisco Values" remains a solid #3. But other Hastert classics from the short-lived You've Got Male FoleyGate Dance Mix, including "Ongoing Investigation" and "George Soros and the Democrats" quickly disappeared from the list.
For the archives of past Top 10 GOP Sound Bites lists, visit here.