The Bushboard List of Top 10 GOP Sound Bites has seen another shake-up at the top of the charts. With the exploding U.S. attorneys scandal, the Scooter Libby verdict and the debate over Iraq war funding, a new crop of Republican talking points is zooming up the rankings. 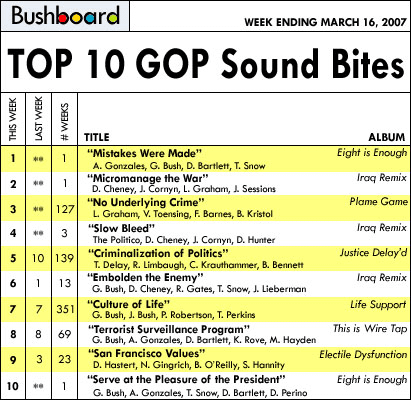 Topping the charts is the Gonzales-Bush smash hit "Mistakes Were Made" from their tribute album to the former federal prosecutors, Eight is Enough. With the conviction of Dick Cheney chief-of-staff Scooter Libby in the CIA leak case, the GOP has reissued two of its monster releases from 2005, "No Underlying Crime" (#3) and "Criminalization of Politics" (#5) And as the Congressional debate rages over Iraq war funding and possible timelines for U.S. withdrawal, several cuts from the Republicans' double-platinum Iraq Remix LP have moved up the charts. "Micromanage the War" now comes in at #2, with the Dick Cheney band's cover of The Politico's heavy metal "Slow Bleed" number 4.
For previous lists of the Top 10 GOP Sound Bites, visit the archives here.

2 comments on “Top 10 GOP Sound Bites, "Mistakes Were Made" Edition”