It's been another tumultuous week atop the Bushboard list of the Top 10 GOP Sound Bites. The Republicans' all-out campaign of obstruction joined the Iraq war funding debate, the release of President Bush's interim surge progress report and the Alberto Gonzales death spiral to reshuffle the GOP talking point greatest hits. 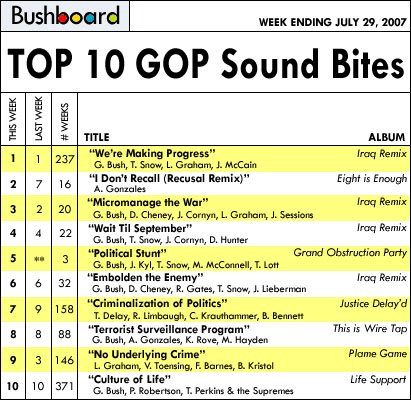 Once again topping the charts from his Iraq Remix release is George W. Bush's fantasy rock classic, "We're Making Progress." From the same album and moving up to #4 is the B-side "Wait Til September." (A dance remix is rumored to be in development for year-end or mid-2008 release.) Meanwhile, Alberto Gonzales' haunting "I Don't Recall" stayed strong at #2. And rocketing up the charts is the first single from Republicans' Grand Obstruction Party CD. John Kyl's angry ballad of unrequited love from Harry Reid, "Political Stunt" is now #5.
Please take a moment to mourn the death of a GOP classic sound bite, "Up or Down Vote." Enjoying years of success in the conservative club scene, "Up or Down Vote" quietly dropped off the charts after series of successful Republican filibusters to block popular Democratic initiatives.
For previous lists of the Top 10 GOP Sound Bites, visit here.