Trump Joins Past U.S. Presidents Who "Like the Numbers Being Where They Are" 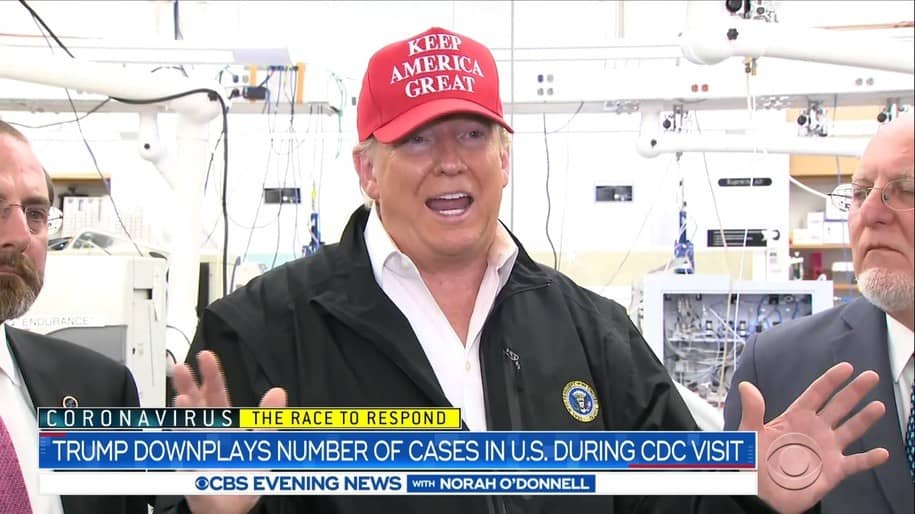 President Trump ignited a firestorm of criticism following his comments Friday at the Centers for Disease Control (CDC). After Trump explained, “I’d rather have the people stay” on the 3,500 person cruise ship anchored near San Francisco with 21 coronavirus cases “because I like the numbers being where they are,” Philip Bump of the Washington Post asked in astonishment, “Which is Trump more worried about: Coronavirus numbers or coronavirus patients?” Shocked that the President would refuse to evacuate stricken Americans because that “will make the numbers go up,” a disgusted Chris Hayes of MSNBC lamented, “This is what happens when you elect a BS artist to the most important job in the country.”

Unfortunately, this is what happens when you have a media that is out of touch with both the American people and American history. As it turns out, many of the greatest presidents in the history of the United States showed exactly the same concern with “the numbers being where they are.”

Consider, for example, Franklin Delano Roosevelt. In the run-up to the invasion of France on June 6, 1944, America’s only four-term president expressed his concern over the horrific casualties expected on D-Day. When U.S. Army Chief of Staff George Marshall warned FDR that day one of Operation Overlord could cost the allies 5,000 killed and another 20,000 wounded (most of them American), Roosevelt suggested keeping the 5,000-ship armada anchored off the coast of Normandy. Even one landing craft lost was a frightening prospect for a president worried about his reelection that fall:

“I have great experts, including our vice president who is working 24 hours a day on this stuff. They would like to have the people come off. I’d rather have the people stay.

“I would rather because I like the numbers being where they are. I don't need to have the numbers double because of one ship that wasn't our fault. And it wasn't the fault of the people on the ship either, okay? It wasn't their fault either and they're mostly Americans. So, I can live either way with it. I'd rather have them stay on, personally.”

Instead, FDR explained his “Bluff on the Bluffs” would distract “Little V1 Rocket Man” (his nickname for Hitler) while the Soviet Red Army advanced from Poland into Germany.

Mercifully, General Marshall and Supreme Allied Commander Dwight D. Eisenhower persuaded Roosevelt to stick with the original plan. (Ironically, Ike had his own moment of doubt after the Battle of the Bulge. After the 76,000 U.S. casualties in the Ardennes, the future president told General Omar Bradley “I’d rather stay” in Belgium “because I like the numbers being where they are.”

Overlord wasn’t Roosevelt’s first time worrying about how the American people would react to bad math. After the carnage at Pearl Harbor, FDR couldn’t stomach adding to the 2,400 U.S. dead in Hawaii. In his original draft of his speech to Congress declaring war on Japan, Roosevelt planned to say:

“YESTERDAY, December 7, 1941 a date which will live in infamy the United States of America was suddenly and deliberately attacked by naval and air forces of the Empire of Japan.

The attack yesterday on the Hawaiian Islands has caused severe damage to American naval and military forces. I regret to tell you that very many American lives have been lost. In addition American ships have been reported torpedoed on the high seas between San Francisco and Honolulu.

But I will not be deploying the ground, air and naval forces of the United States to turn back the Japanese onslaught. I’d rather they stay in the bases.

I would rather because I like the numbers being where they are. I don't need to have the numbers double because of one ship that wasn't our fault. And it wasn't the fault of the people on the ship either, okay? It wasn't their fault either and they're mostly Americans. So, I can live either way with it. I'd rather have them stay on, personally.”

But FDR reversed course in the face of a near-rebellion by his cabinet. Even his dovish Vice President Henry Wallace was outraged and personally replaced the last two paragraphs above with the rousing call to arms:

“No matter how long it may take us to overcome this premeditated invasion, the American people in their righteous might will win through to absolute victory.”

American history is replete with proud precedents to which President Trump can point in support of his COVID-19 cowardice. Remembering the cry from Bunker “don’t fire until you see the whites of their eyes—unless you like the numbers being where they are,” General George Washington was reluctant to hurl his forces at the British during the decisive Battle of Yorktown in 1781. “Let Lafayette and the French fleet deal with Cornwallis,” Washington pleaded, “I don't need to have the numbers double.” Only after Lafayette knocked the wooden teeth out of his mouth did the Father of His Country find his backbone.

The 16th President was as sensitive to the bad PR accompanying a rising body count as the 45th.  In his First Inaugural Address on March 4, 1861, Abraham Lincoln repeated his famous proclamation that “a house divided against itself cannot stand,” but added “I can live either way with it.” Regarding the high tensions with the growing number of secessionist states, he continued:

“In your hands, my dissatisfied fellow-countrymen, and not in mine, is the momentous issue of civil war. Seriously, because I like the numbers being where they are.”

Lincoln’s friend Ward Lehman did not forget the painful silence which greeted Lincoln’s words that rainy day at the Capitol. So, Lehman took out his editor’s pen as President Lincoln prepared to address the new National Cemetery at Gettysburg in November 1863.  The gravity of the occasion was not lost on either man, coming as it did where 150,000 men fought and over 50,000 were killed and wounded the previous July. But excerpts from Lincoln’s first draft included these passages:

“Fourscore and seven years ago our fathers brought forth, on this continent, a new nation, conceived in liberty, and dedicated to the proposition that all men are created equal. We had a good run.”

“The brave men, living and dead, who struggled here, have consecrated it far above our poor power to add or detract…So let’s not add to it; I like the numbers being where they are.”

“We here highly resolve that these dead shall not have died in vain—that this nation, under God, shall have a new birth of freedom, and that government of the people, by the people, for the people, shall not perish from the earth—unless you were to tell me the numbers would double. I like the numbers being where they are. I don't need to have the numbers double.”

“Lincoln,” an exasperated Lehman told his friend, “that speech won’t scour.” Together they edited the Gettysburg Address on the train. And the rest is history.

History, like John F. Kennedy’s Inaugural Address. His speechwriter Ted Sorenson rewrote the original text, which initially read: “We shall pay any price, bear any burden, meet any hardship, support any friend, oppose any foe to assure the survival and success of liberty—provided the numbers stay where they are.” In October 1962, we only recently learned, Kennedy at first opposed by an American invasion of Cuba and a naval quarantine of the island in response to the Soviet placement of nuclear missiles there. After the previous year’s humiliation at the Bay of Pigs, JFK explained, “. I don't need to have the numbers double because of one ship that wasn't our fault.” Luckily, Robert Kennedy stiffened his brother’s weak backbone.

Then there’s Ronald Reagan, the role model for every Republican president since before he left the surly bonds of earth to touch the face of God. Speaking in Berlin on June 12, 1987, President Reagan spoke of the oppression and suffering of those East Germans on the other side of the Brandenburg Gate just behind him:

Mr. Gorbachev, tear down this wall!

Then again, I’d rather have the people stay. I would rather because I like the numbers being where they are.”