Trump Accidentally Gets It Right on Expanding Legal Immigration 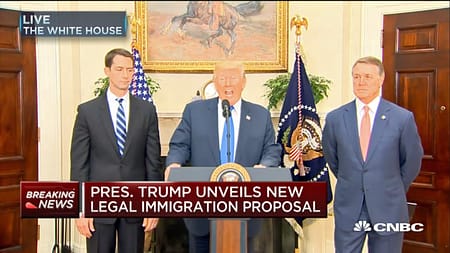 Even a broken clock, the old saying goes, is right twice a day. So it was for Donald Trump during his 2019 State of the Union address on Tuesday night. During perhaps the most backward-looking presidential message in memory, the president thundered about a mythical national crisis of undocumented immigration putting America and Americans at risk. But wedged into his tirade about the supposedly "dangerous" threat to "the safety, security, and financial well-being of all America" posed by this "tremendous onslaught" at our southern border, Trump also offered this very forward-looking statement:

Legal immigrants enrich our nation and strengthen our society in countless ways. I want people to come into our country in the largest numbers ever, but they have to come in legally. [Emphasis mine]

A quick glance at his remarks as prepared for delivery shows Trump ad-libbed that hopeful clause. But on Wednesday, the president doubled-down on his born-again vision for greatly expanded legal immigration so out-of-step with his record and past rhetoric. Asked by a reporter from The Advocate of Louisiana if his statement represented "a change of policy," Trump responded:

Leaving aside for the moment Trump's dubious claims about companies "moving back" to the United States, he happens to be onto something about the future needs of the American economy. After all, the U.S. birthrate has plummeted to its lowest level in 30 years, exacerbating the aging of the American population now well underway. And as it turns out, barring some major breakthrough in American productivity, dramatically increasing the number of immigrants welcomed each year to the United States is the only way Donald Trump can deliver on his goal of 4 percent annual economic growth.
Continue reading at Daily Kos.