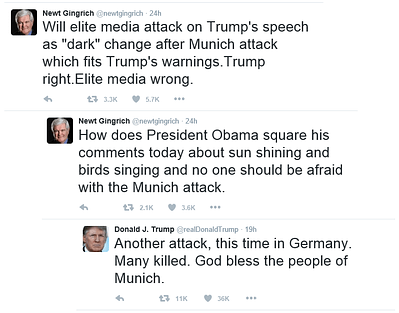 One day after the horror in Munich, German authorities are still assembling a fuller picture of the 18-year-old assailant who killed 9 people in a shopping mall there. With the revelations that the gunman was a seriously depressed loner who had researched past school shootings including Columbine and Virginia Tech, it appears increasingly likely his rampage was not an act of terrorism at all. While investigators have found no evidence of ties to ISIS or other Islamic terror groups, NPR reported that "police are checking into leads that he had recently converted to Christianity."
But you wouldn't know any of that if you listened to Donald Trump's new propagandists, Newt Gingrich. On Friday morning, Gingrich took to Twitter to declare that the bloodshed in Bavaria validated Trump's dark warnings at the Republican National Convention. By now, though, Americans should have to come expect that Newt would jump the gun. After all, for more than two decades the former House Speaker has been rushing to baselessly blame Democrats and liberalism for murders, protests, mass killings and so much more.
Gingrich's obscene finger-pointing started in 1994. After dumping his cancer-stricken first wife but before marrying his mistress following the adulterous affair that ended his second marriage, Newt pointed the finger at Democrats for the Susan Smith affair.
It was Smith who drew Americans' initial sympathy - and subsequent scorn - for her invention of a black bogeyman to conceal her heinous crime.
On October 24th, 1994, as the New York Times recalled, Smith killed her young sons, killings for which she was eventually sentenced to life in prison:

That night, investigators say, Mrs. Smith pulled her car to the edge of a deep lake, stepped out, put the gearshift in drive and let it roll down the boat ramp into the black water. Her two little boys, buckled snugly in their safety seats, died under the lake...
..."I believed her, right up to the end," said Juliaette Kerhulas, of Mrs. Smith's story that a young black man had ordered her out of her burgundy 1990 Mazda on the night of Oct. 25, then driven away with 3-year-old Michael and 14-month-old Alexander in the back seat.

Ms. Kerhulas wasn't the only one who believed in her. None other than future House Speaker Newt Gingrich rushed to the defense of Smith, whose step-father ironically happened to be a prominent Republican fundraiser and member of the Christian Coalition. Even after her confession, Gingrich insisted the Smith murders showed the decay of American society under Democratic Party rule:

Enter Newt Gingrich, who rushed into action on election eve with another reliable generic culprit: society. He said the double murder "vividly reminds every American how sick the society is getting and how much we need to change things," expediently adding that "the only way you get change is to vote Republican."

As Frank Rich recounted in August 1995:

Asked later by Tom Brokaw to elaborate, the Speaker-to-be cited "a direct nexus between the general acceptance of violence" and "the pattern that the counterculture and Lyndon Johnson's Great Society began in the late 60's."

Despite that embarrassment, five years later Gingrich resurrected the charge of liberal complicity after the slaughter of school children at Columbine. As Steve Benen recalled:

Gingrich insisted that American "elites" bore responsibility for the massacre. "I want to say to the elite of this country -- the elite news media, the liberal academic elite, the liberal political elite: I accuse you in Littleton ... of being afraid to talk about the mess you have made," Gingrich said, "and being afraid to take responsibility for things you have done, and instead foisting upon the rest of us pathetic banalities because you don't have the courage to look at the world you have created."

As it turns out, Newt Gingrich's attempts to blame Democrats for the murderous rampages of the mentally exceeds his number of wives. As ThinkProgress noted, when ABC's George Stephanopoulos asked if he saw the 2007 Virginia Tech tragedy the same way, Gingrich said "yes" because liberals have created "situation ethics" zone free of religion. And in March 2010, just days after Democratic members of Congress including Gabrielle Giffords received death threats in the wake of their health care votes, Newt blamed the Democrats themselves:

"Just as there was no place for the kind of viciousness against Bush and Cheney, there's no place for viciousness against Democrats. I would condemn any kind of activity that involves that kind of personal threat...
I think the Democratic leadership has to take some moral responsibility for having behaved with such arrogance, in such a hostile way, that the American people are deeply upset. So let's be honest with this. This is a game that they're playing. People should not engage in personal threats. I'm happy to condemn any effort to engage in personal threats. But I think the Democratic leadership has to take some real responsibility for having run a machine that used corrupt tactics, that bought votes, that bullied people, and as a result has enraged much of the American people. And I think it'd be nice for President Obama, Speaker Pelosi, and Majority Leader Reid to take some responsibility over what their actions have done to this country."

Newt Gingrich, now as then, was completely wrong. Over 20 years after Susan Smith backed her car into the lake, it'd be nice for Newt Gingrich to take some responsibility over what his actions have done to this country and apologize.
Don't hold your breath while you wait.