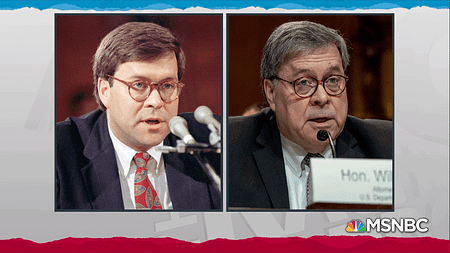 Historical events occur twice, Karl Marx famously said, first as tragedy and then as farce. But when it comes to the rampant lawlessness of Republican presidential administrations, the record is a succession of national tragedies for the United States. And the damage to America's democratic institutions is no laughing matter. As President Trump, his attorney general, and their allies in right-wing media demonstrated this week in their thus far very successful effort to suppress the Mueller report, the Republican Scandal Defense Machine™ has featured many of the same odious operatives, sham sound bites, and laughable legal theories since the late 1980s. From the Iran-Contra affair, the outing of covert CIA agent Valerie Plame, and President George W. Bush's purge of U.S. attorneys to his regime of detainee torture, and now the Trump-Russia imbroglio, only the stakes have changed.
For starters, consider the role of Attorney General William Barr. Trump, after all, hired Barr precisely because of--and not despite--his 2017 memo, which argued that special counsel Robert Mueller's investigation was "grossly irresponsible" and "fatally misconceived," and risked "grave consequences far beyond the immediate confines of this case and would do lasting damage to the presidency and to the administration of law within the executive branch." That opposition, echoed by many Republicans in the spring of 2017, sounds eerily similar to the language used by George W. Bush, Dick Cheney, Tom DeLay and others in initially refusing to support the creation of the 9/11 Commission. And when Barr warned, "Mueller's sweeping obstruction theory would now open the way for the 'criminalization' of these [political] disputes," he was only dusting off the talking point President George H.W. Bush debuted to defend Iran-Contra pardons that he and Barr engineered 25 years earlier.
But Barr's 21st-century reprisal of his role as GOP legal hatchet man isn't merely rhetorical. The same attorney general who in his March 24 letter and again in his highly redacted version of the Mueller report promised to share its "principal conclusions" lied to Congress 30 years ago when he made the same pledge. As Ryan Goodman documented this week, as head of the DOJ's Office of Legal Counsel, Barr refused to release a memo justifying the supposed legality of the FBI's power to abduct foreigners (like Panamanian dictator Manuel Noriega) and bring them to the United States without consent from the leaders of those countries. Wrong on both the facts and the law, Barr shared only his summary of the secret memo in written testimony to Congress. As Goodman explained, worse than what Barr misrepresented was what he omitted altogether.
Continue reading at Daily Kos.