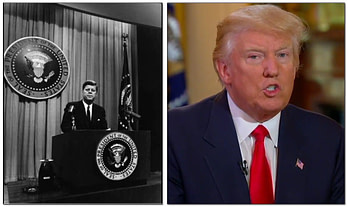 Donald Trump's first military operation as Commander-in-Chief has been a disaster. But January's special forces operation in Yemen wasn't a fiasco just because of the tragic death of Navy SEAL William "Ryan" Owens and the killings of more than 20 Yemeni civilians. And it wasn't a failure just because the vicious--and unexpected--firefight with well-prepared Al Qaeda gunmen ultimately yielded little useful intelligence. And bad as it was, the raid, apparently greenlighted by President Trump during a dinner with his son-in-law, didn't just alienate America's allies in Yemen even as it signaled a deeper U.S. commitment to the proxy war between Iran and Saudi Arabia there.
No, the lasting disgrace isn't the outcome of the January 29 operation, but its aftermath. A month after the raid, President Donald Trump is refusing to take ownership of the mission he ordered. Unlike the example the newly inaugurated John F. Kennedy set after his Bay of Pigs calamity in April 1961, Commander-in-Chief Trump is blaming anyone and everyone--but himself.
It was bad enough that Trump and his press secretary Sean Spicer insisted the mission was a "success" and declared that "who would suggest it's not a success does disservice to the life of Chief Ryan Owens." As the supposed Commander-in-Chief told Fox and Friends this week:

"This was a mission that was started before I got here. This was something they wanted to do," he said. "They came to me, they explained what they wanted to do ― the generals ― who are very respected, my generals are the most respected that we've had in many decades, I believe. And they lost Ryan."

The contrast with JFK after a much larger, far more serious catastrophe in Cuba could not be more stark.
In April 1961, Kennedy was devastated and embarrassed by the Bay of Pigs fiasco, the tragically abortive exile invasion of Castro's Cuba architected by the Eisenhower CIA. Over a hundred Cuban exile fighters were killed and a thousand taken prisoner. The global blowback was severe from the botched operation to topple Castro obviously orchestrated by the United States. But unlike his successor 46 years later, JFK moved quickly to address the two lessons of the disaster.
First, Kennedy took complete responsibility for the calamity, taking to the airwaves the next day for a nationally televised mea culpa. In his April 21 press conference, JFK made it clear that responsibility for the Bay of Pigs was his alone. Kennedy declared, "I am the responsible officer of the government." As he famously put it:

"There's an old saying that victory has a hundred fathers and defeat is an orphan."

Just six days later, JFK addressed the American Newspaper Publishers Association. "I have selected as the title of my remarks tonight 'The President and the Press," Kennedy said, "Some may suggest that this would be more naturally worded 'The President Versus the Press.' But those are not my sentiments tonight." As he explained even as the Bay of Pigs fiasco was still fresh:

"I not only could not stifle controversy among your readers--I welcome it. This Administration intends to be candid about its errors; for, as a wise man once said: 'An error doesn't become a mistake until you refuse to correct it.' We intend to accept full responsibility for our errors; and we expect you to point them out when we miss them."

Correct it he did. So second, President Kennedy took immediate steps to shake up the national security team and group-think process that had served him so poorly. Complaining about the CIA and Joint Chiefs, JFK admitted in private, "I just took their advice." He responded by sacking CIA Director Allen Dulles and two of his deputies. More importantly, Kennedy put in place the Executive Committee (or ExComm) including both current and former cabinet members (among them Republicans) to ensure multiple perspectives and options in times of crisis. Just one year later, Kennedy's out-of-box approach paid rich dividends for him and the nation in the successful resolution of the Cuban missile crisis.
Fast forward to 2017. As Andrew Exum rightly pointed out, second-guessing any President on any given military operation is problematic. "Blaming Trump for what happened is both inappropriate and counterproductive," Exum wrote of the tragedy in Yemen. "America cannot punish its elected officials for allowing its military, diplomatic corps, and intelligence services to take risks necessary to pursue its interests."
Fair enough. But blaming Trump and having Trump take ownership of his own small scale Bay of Pigs are two very different things. Our new Commander-in-Chief will neither take responsibility nor pursue the reforms of his White House decision-making process to avoid a repeat of the failure in Yemen. Instead, our new President insists, the buck stops with anyone else. Apparently, defeat has a thousand fathers, and none of them are named Donald Trump.