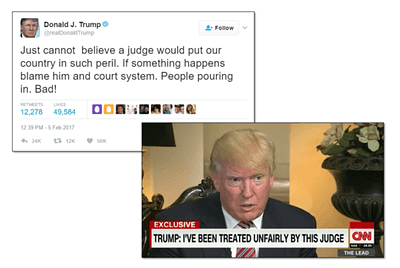 By now, no one should be surprised that the president of the United States is threatening U.S. district court Judge James Robart. After targeting Judge Gonzalo Curiel in 2016 for his ruling in a Trump University case, our so-called president went after "so-called" Judge James Robart for suspending the White House's draconian anti-Muslim executive order. "Just cannot believe a judge would put our country in such peril," the nominal leader of the Free World tweeted, "If something happens blame him and court system. People pouring in. Bad!"
But if Donald Trump's temper tantrum was completely predictable, so too were the milquetoast responses from the GOP's best and brightest. Vice President Mike Pence rejected the idea that POTUS has put the separation of powers at risk, feebly remarking, "I think the American people are very accustomed to this president speaking his mind, and speaking very straight with them." As for Senate Majority Leader Mitch McConnell, who last year could muster only "I'm willing to say that Donald Trump is a different kind of candidate" during the Curiel outrage, offered only platitudes Sunday, such as "it is best not to single out judges."
Of course, there's no mystery for the Republican refusal to condemn Trump's not-so-thinly veiled threats toward Judge Robart. As it turns out, judicial intimidation has been a time-tested Republican political tactic for years.
Consider, for example, John Cornyn. In March 2015, the former Texas Supreme Court judge and second highest-ranking Senate Republican promised a bludgeoning for any nominee President Obama might choose to replace the late Justice Antonin Scalia. "I think they will bear some resemblance to a piñata," he warned, "Because there is no guarantee, certainly, after that time they're going to look as good as they did going in." But back in 2005, Cornyn was one of the GOP standard bearers in the conservative fight against so-called "judicial activism" in the wake of the Republicans' disastrous intervention in the Terri Schiavo affair. On April 4 that year, Cornyn took to the Senate floor to issue a clear threat to judges opposing his reactionary agenda. Just days after the murders of a judge in Atlanta and another's family members in Chicago, Cornyn offered his endorsement of judicial intimidation:

"I don't know if there is a cause-and-effect connection, but we have seen some recent episodes of courthouse violence in this country. ... And I wonder whether there may be some connection between the perception in some quarters, on some occasions, where judges are making political decisions yet are unaccountable to the public, that it builds up and builds up and builds up to the point where some people engage in, engage in violence."