Historical events, it is said, occur twice: first as tragedy and then as farce. So it is with Donald Trump, the latest Republican White House hopeful to talk tough about the price of oil. After all, with his pledge to oil producing nations that "you're not going to raise that f**king price," Trump is just echoing then-candidate George W. Bush's promise to "jawbone OPEC members to lower prices." Sadly, a decade of rising global demand and American refusal to countenance energy conservation or alternatives put the lie to that bravado.
That pathetic history didn't stop game-show host and ersatz GOP front-runner Donald Trump from grandstanding on the issue. Earlier this month, Trump declared, "I very simply said that Iran is going to take over Iraq, and if that's going to happen, we should just stay there and take the oil." Reiterating his belief that anything less would mean American military personnel "would have died in vain," Trump told Fox News this week:

"We won a war. We're in a war. We spent $1.5 trillion on this war. We lost thousands of soldiers, great military people, and thousands and tens of thousands are wounded. And I say take the oil."

But it was during his profanity laced tirade in Las Vegas when businessman Donald Trump threw down the gauntlet to OPEC:

"You're gonna be paying five and six dollars a gallon for gasoline pretty soon, and they want to go and raise the price of oil? Because we have nobody in Washington that sits back and says, 'You're not gonna raise that f--ing price, you understand me?'"

If the Donald's self-proclaimed "Trump Doctrine" sounds familiar, it should.
On May 7, 2001, Bush press secretary Ari Fleischer was asked "does the President believe we need to correct our lifestyles to address the energy problem?" Fleischer's infamous response made clear energy conservation was off the table for President Bush:

Instead, George W. Bush promised to get biblical on OPEC.
His pledge to persuade, cajole and other twist arms dated back to his first run for the White House in 1999. As oil prices rose to the then-alarming level of $30 that December, then Governor Bush said President Clinton "must jawbone OPEC members to lower prices." At a New Hampshire Republican debate the next month, Bush claimed the mantle of the Great Persuader. Contending that his days in the West Texas oil fields made him uniquely qualified for the task, Bush proclaimed:

"What I think the president ought to do is he ought to get on the phone with the OPEC cartel and say we expect you to open your spigots...And the president of the United States must jawbone OPEC members to lower the price...
...I used to be in the oil business. I was little oil -- really little oil. And so I understand the -- I understand what can happen in the marketplace."

By June 2000, the Bush jawbone pledge became a standard on the stump. As the New York Times reported, Bush foreshadowed future expenditures of political capital he would fail to accumulate:

That November, of course, the American people were persuaded. Despite Bush's own personal record of busts and bailouts in the business, his family's close ties to Prince Bandar and the Saudi royal family, Americans must have reasoned, should count for something.
As it turned out, not so much. 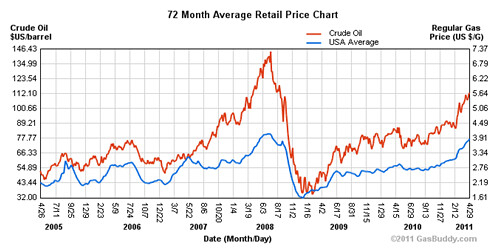 Confusing master and slave in the American-OPEC relationship, Bush failed at every turn to get his Persian Gulf friends to bump up production or slash prices. Other times, of course, he didn't even try.
In the spring of 2004, the White House trumpeted Saudi Prince Bandar's commitment to maintaining the price of oil in the range of $22 to $28 a barrel. With the price then at $33 a barrel, by April speculation ran rampant that President Bush had secured a deal with the Saudis just in time for the November election. But as a barrel reached then-record levels topping $50, it became clear that both Bush and Bandar were backing off their past pledges. As CBS News reported that September:

As gas topped a record level of $50 a barrel this week, Mr. Bush has shown no propensity to personally pressure, or "jawbone," Mideast oil producers to increase output.
A spokesman for the president reportedly said in March that Mr. Bush will not personally lobby oil cartel leaders to change their minds.

In the spring of 2005, President Bush returned to his failed formula on oil prices. Promising to use his self-proclaimed charm to woo the Saudis, Bush would ultimately leave the American people to the mercy of the marketplace. As the AP detailed:

In a CNBC interview, Bush said he would press the Saudi crown prince to boost production. "I'll be talking to our friends about making sure they understand that if they pinch the world economy too much, it'll affect their ability to sell crude oil in the long run," Bush said.
Jerry Taylor, an energy analyst at the Cato Institute, a Washington-based think tank that advocates less government regulation, said the idea that "jawboning OPEC or arranging for nice relations with OPEC will somehow get us more oil is utter illusion."

An illusion, indeed. As the price of a barrel oil surged into record territory in March, OPEC dismissed out of hand President Bush's latest use of his jawbone. Pointing to the collapse of the dollar during the Bush presidency and the slumping American economy, OPEC leaders are not budging on production levels or prices:

"OPEC is angry that President Bush wants them to increase production while the dollar is sinking and the administration is doing nothing about that," said Fadel Gheit, an oil analyst at Oppenheimer & Company in New York. "It"s really not surprising that they have ignored him."

Back in Washington, President Bush that April was left to grouse about Congress for a situation he insisted was not his fault. In prepared remarks peppered with accusations of Congressional inaction, Bush opened with a salvo aimed at Capitol Hill. "I've repeatedly submitted proposals to help address these problems," Bush said, "Yet time after time, Congress chose to block them." Ultimately, a frustrated George W. Bush suggested the energy crisis called for a higher power:

"And so I firmly believe that -- you know, if there was a magic wand to wave, I'd be waving it, of course."

By early 2008 when a barrel of oil reached $127, President Bush's impotence in the face of the stratospheric - and uninterrupted - rise in gas prices reached comic proportions. Asked by a reporter on February 28, 2008 about the looming arrival of $4 gas, Bush the former oil man did what comes naturally and played dumb:

To put Bush's mind-numbing mindlessness into context, it is worth noting that even White House press secretary Dana Perino had gotten the memo. Six months before Bush gave his deer-in-the-headlights response, the woman who earlier proclaimed her ignorance of the Cuban Missile Crisis discussed the $4 barrier with reporters at an October 16, 2007 press briefing:

Q Dana, analysts say that gasoline prices could go as high as $4 a gallon because of the current run-up in the price of a barrel of oil. Does the White House have any plan to -- for relief for the American consumer should gasoline get --
MS. PERINO: Well, I'd refer you to the Department of Energy. Obviously they track that very closely. Last spring everyone in here said gasoline was going to go to four gallons -- $4 a gallon, as well. Look, there's no doubt that energy prices are too high. They disproportionately hurt low-income families that have to spend so much of their money on energy, and when those prices go up, it eats into the family budget on the other things that they want to be able to buy.

Perino was right, of course, about the impact that $4 a gallon gas (it reached a high of $4.11 in July 2008) would have on working Americans. But that paled in comparison to the Bush Recession which devastated the economy. It was that calamity and the plummeting demand accompanying it, and not Dubya's dubious powers of persuasion, which by November 2008 drove gas prices below $2 a gallon and the decline of a barrel of oil by almost $100 since its record high that July.
But those days are over.

As Paul Krugman explained in December:

What the commodity markets are telling us is that we're living in a finite world, in which the rapid growth of emerging economies is placing pressure on limited supplies of raw materials, pushing up their prices. And America is, for the most part, just a bystander in this story...
In particular, today, as in 2007-2008, the primary driving force behind rising commodity prices isn't demand from the United States. It's demand from China and other emerging economies. As more and more people in formerly poor nations are entering the global middle class, they're beginning to drive cars and eat meat, placing growing pressure on world oil and food supplies.
And those supplies aren't keeping pace. Conventional oil production has been flat for four years; in that sense, at least, peak oil has arrived.

"We're right back to where we were in 2007 and 2008, in terms of U.S. demand. What's different this time, however, is that Asia's demand is much, much higher than two years ago. And the world is having a very difficult time getting past 85 million barrels-a-day of (crude oil) production."

As for the critics of President Obama's policies on offshore drilling, even George W. Bush in 2008 admitted that in the near term "drill, baby, drill" wouldn't do much to budge production or prices.

"I readily concede that, you know, it's not going to produce a barrel of oil tomorrow, but it is going to change the psychology."

As it turned it out, not so much.
As ClimateProgress explained in March, last year U.S. domestic production rose to its highest level in the last decade and is on track to rise by 25% by the end of the next one. The only way to lessen American vulnerability to increasingly frequent price shocks "is an aggressive strategy to reduce the country's oil intensity (oil/GDP), including a steady increase the fuel efficiency of our vehicles; policies that conservatives have fought for decades." As Ezra Klein of the Washington Post lamented yesterday:

"On some level, speculation is an easy problem to handle. It's a problem you can crack down on. The same can't be said for China, Saudi Arabia or the world's dependence on oil."

But for Donald Trump as for George W. Bush before him, that kind of talk is nonsense. Trump will follow Bush's failed approach and simply "jawbone OPEC members" into not raising "that f**king price." Then again, candidate Bush also promised: