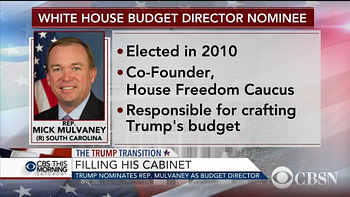 So far, the defining trait of the incoming Trump administration is its staffing with extremists dedicated to destroying the agencies they are supposed to head. Friday was no exception, as President-elect Trump made the latest addition to his Kamikaze Cabinet by selecting South Carolina Republican Congressman Mick Mulvaney to direct the Office of Management and Budget (OMB). Rep. Mulvaney, after all, didn't just pledge to vote against any increase in the nation's debt ceiling. As it turns out, the Freedom Caucus fanatic has rejected the inescapable truth that the United States of America would default by failing to do so. And with President Trump forecast to bleed $15 trillion in new red ink over the next decade, Mick Mulvaney as the Director of Default Denial risks an American--and a global--economic catastrophe.
You don't have to take my word. Just ask the best and brightest of the Republican Party.
As you'll recall, the U.S. debt limit places a cap on Uncle Sam's borrowing authority. From 1980 to 2010, presidents and Congressional majorities from both parties routinely raised the debt ceiling to enable the Treasury to borrow more money to pay the bills the federal government had already incurred. This was the case when Ronald Reagan tripled the national debt during his 8 years in office. After 17 debt ceiling hikes during Reagan's tenure, George W. Bush required 7 more as he nearly doubled the U.S. national debt again. Failure to raise the debt ceiling would immediately jeopardize the full faith and credit of the United States and thus trigger a sovereign default. That's why Rep. Paul Ryan (R-WI) warned, "Yes, you can't not raise the debt ceiling. Default is the unworkable solution." As the new Speaker John Boehner put it six years ago:

"That would be a financial disaster, not only for our country but for the worldwide economy. Remember, the American people on Election Day said, 'we want to cut spending and we want to create jobs.' And you can't create jobs if you default on the federal debt."

Nevertheless, when the GOP took over the House of Representatives after the 2010 midterm elections, Republicans decided to extort President Obama by taking the debt ceiling hostage. And some, like Rep. Mick Mulvaney, went a step further. As The Hill reported in December 2010:

Rep.-elect Mick Mulvaney (R-S.C.), who defeated current House Budget Chairman John Spratt (D-S.C.) in November, said he would vote against any attempt to raise the nation's debt ceiling.
"I have heard people say that if we don't do it it will be the end of the world," he said. "I have yet to meet someone who can articulate the negative consequences."
Mulvaney said that 2011 spending needs to be reduced to 2008 discretionary levels, and argued that the demise of the omnibus offers that opportunity.

Mulvaney was simply lying, as the statements of the GOP leadership made clear. But as the debt ceiling crisis reached the point of no return in the summer of 2011, warning lights worldwide were flashing red. With the prospect of Washington having to immediately cut federal spending by a staggering 44 percent, the Bipartisan Policy Center warned "On an annualized basis, the cut in spending alone is a 10 percent cut in GDP." The IMF sounded the alarm, too, pleading with Congress that "the debt ceiling should be raised as soon as possible to avoid damage to the economy and world financial markets." President Obama's Treasury Secretary Tim Geithner ("Failure to increase the limit would be deeply irresponsible") and chief economist, Austan Goolsbee ("If we get to the point where you've damaged the full faith and credit of the United States, that would be the first default in history caused purely by insanity") issued dire forecasts about the cataclysmic consequences of a U.S. default that August.
But GOP default deniers like Michele Bachmann dismissed those predictions out of hand. Bachmann accused Secretary Geithner of "outright blatant lies" and "scare tactics." For his part, Rep. Mulvaney scoffed at the warnings despite his own admission that he didn't know what would happen if the U.S. defaulted on its debt. As ThinkProgress reported:

Yesterday, newly-elected Rep. Mick Mulvaney (R-SC) appeared on Fox Business to talk about his own intention to vote against raising the debt ceiling. The host asked Mulvaney if he was willing to "risk the possibility of a default on our debt." Mulvaney responded that he has "no difficulty in" voting against raising the debt limit and that it's worth it to "force a discussion" about spending. The host then followed up by asking, "What do you think would happen if the debt ceiling wasn't raised?" Mulvaney responded, "Well, I don't know. I've asked that question a lot. I've heard Goolsbee on Sunday say it'd be catastrophic, I've heard others say that. I did some research last night from [the Congressional Research Service], they don't know what that means. I think they're guessing."

People like Bachmann and Mulvaney could have just talked to Ezra Klein, who called their brand of default denialism "the scariest thing I've ever heard on television":

It makes perfect sense unless you, like me, had spent the previous few days talking to economists, investors and economic policymakers about what could happen if we start playing games with the debt ceiling. Their answers were across-the-board apocalyptic. If the U.S. government is so incapable of solving its political problems that it can't come to an agreement on the debt ceiling, they said, that's basically the end of the United States as the world's reserve currency. We won't be considered safe enough to serve as the investment of last resort. We would lose the most important advantage our economy has in the global financial system -- and we'd probably lose it forever. Skyrocketing interest rates would slow our economy and, in real terms, make it even harder to pay back our debt, which would in turn send interest rates going even higher. It's an economic death spiral we associate with third-world countries, not with the United States.

Ultimately, the United States didn't default on its debt in the summer of 2011. The Budget Control Act, the same agreement which imposed the "sequester" on future federal spending, included a deal to raise the debt ceiling. Nevertheless, America paid a price as the GOP's manufactured uncertainty over the economy stifled job creation, drove down consumer confidence and led Standard & Poor's to lower Uncle Sam's credit rating. It's with good reason the Republican blackmail came to be known as the "Tea Party Downgrade."
Still, Donald Trump's future OMB pick kept up his assault on economic reality. In the fall of 2013, Mulvaney voted against a budget deal that ended the GOP's government shutdown and raised the debt ceiling. Two years later, he was among House Republicans "demanding changes to entitlement programs as part of any debt-ceiling package." That same fall of 2015, Mick Mulvaney helped engineer the resignation of House Speaker John Boehner and pushed Kentucky Senator Rand Paul's so-called "Cut, Cap and Balance" bill which "would slash the 2016 deficit in half, put a cap on spending and require Congress to pass a balanced budget before raising the debt ceiling." 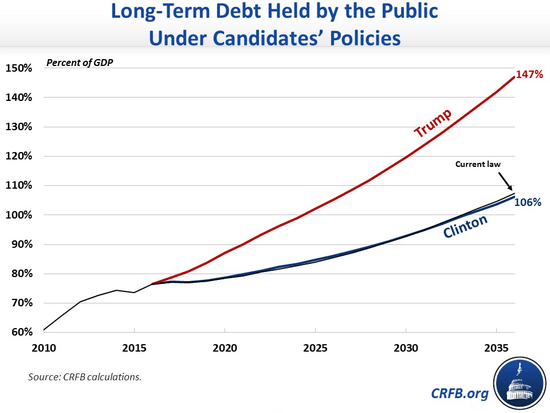 Ironically, Uncle Sam's annual budget deficits have been halved and inflation adjusted federal spending is lower now than when Barack Obama first took the oath of office. But with Donald Trump about to enter the White House, the new President of the United States will soon face a debt crisis of his own making. The debt ceiling will have to be raised in March 2017. Buy on top of $8.6 trillion in new red ink the CBO has previously forecast the federal government will add by 2026, Trump's massive tax cut windfall for the wealthy, hikes in defense spending and promises to maintain Medicare and Social Security benefits mean at least $6 trillion in additional debt over the same 10-year period. At the same time, Trump already promised he would eliminate the entire national debt "I would say over a period of eight years." To do so is virtually impossible, requiring as it would a mind-blowing 80 percent cut in federal spending. The inevitable result would be a U.S. default, an American economic implosion--or both. That risk is higher still when President Trump's budget brain doesn't believe that increasing the debt ceiling is a necessity or that default is a bad thing.
After the Tea Party downgrade in August 2011, S&P issued a warning about the Congressional Republicans who responsible for it:

"That a country even has such voices, albeit a minority, is something notable. This kind of rhetoric is not common amongst AAA sovereigns."

Not common, unless the sovereign in question is ruled by the Republican Party. And now, one of those voices belongs to Mick Mulvaney, Donald Trump's would-be director of the Office of Management and Budget.