Trump Too Chicken to Defend His Obama "Birther" Slander 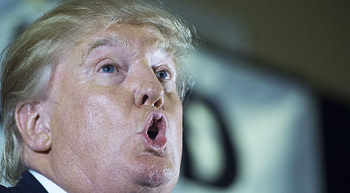 For the second straight week, Republican nominee Donald Trump has continued his much-hyped "outreach" effort to black voters. But as the recent polling suggests, Trump is failing to convince African-Americans that he will "build the future" of the Party of Lincoln "on his legacy." That's in large part because in words and in deeds, Donald Trump is less like Abraham Lincoln and more like Jefferson Davis. And five years after he first made denying the citizenship of the first African-American President of the United States, Donald Trump has refused to apologize for the strategic slander that catapulted him to the forefront of the GOP White House wannabes.
Now, the man who in 2011 and 2012 wouldn't shut up about Barack Obama's birth certificate has nothing to say on the subject. As Aaron Blake documented in the Washington Post:

There's mystery as to why. "Having already built his political brand around Birtherism, he knew he didn't need to delve into it again in order to get the political benefits of it from Republicans," the reliably Republican Hot Air explained on Monday. "Better to ignore it and deny the media a reason to hassle him about it, knowing that his right-wing fans would quietly reward him for what he said about it in the past."
The polling numbers bear that out. A year ago, PPP found that 61 percent of Trump supporters believed Obama was not born in the United States. Sixty-six percent thought he was a Muslim. By May, a new PPP survey put the numbers at 59 and 67 percent. And in an August NBC News/Survey Monkey poll, seventy-two percent of registered Republicans still doubted the President's place of birth. Forty-one percent disagreed outright with the statement, "Barack Obama was born in the United States." For his most devoted followers, Donald Trump's racist Obama birth certificate fraud is a feature, not a bug.
Frustrated that contemporaneous newspaper announcements and his "short-form" birth certificate were not sufficient to quell the myth-making on the right, President Obama on April 27, 2011 released the "long-form" document. Coming just four days before he ordered the raid that killed Osama Bin Laden in Pakistan, Obama rightly declared, "we do not have time for this kind of silliness."
But it wasn't just Donald Trump who made that silliness the centerpiece of his political strategy. To keep them in the good graces of the worst elements of the reactionary right, the GOP's best and brightest needed to keep that fraud alive, too.
Consider, for example, 2012 Republican presidential nominee Mitt Romney. When Governor Romney wasn't accusing the President of the United States of being "extraordinarily foreign," he was providing aid and comfort to conservative fabulists claiming they could prove it. After all, Mitt Romney didn't just refuse to repudiate his Obama birth certificate fraud Donald Trump. Truth be damned, Romney suggested, instead arguing that cobbling together a majority--any majority--was what his candidacy was all about:

"You know, I don't agree with all the people who support me and my guess is they don't all agree with everything I believe in," Romney said. "But I need to get 50.1% or more and I'm appreciative to have the help of a lot of good people."

Among those "good people" were Romney's five sons, the same ones Mitt boasted in 2007 said "showing support for our nation" by "helping me get elected because they think I'd be a great president." The Five Brothers also regurgitated the Birther lies vomited forth by the likes of Limbaugh, Trump and Romney campaign traveling companion Jerome Corsi. When Tagg Romney wasn't joking about "taking a swing" at President Obama, his brother Matt got laughs from New Hampshire Republicans when he brushed off requests for his father's secret tax returns this way:

"I heard someone suggest the other day that as soon as President Obama releases his grades and birth certificate ...then maybe he'll do it."

While he later apologized on Twitter ("my bad"), there was no need for Matt to say sorry to dad. After all, in August 2012 Mitt Romney himself told an audience in Michigan:

"Now I love being home in this place where Ann and I were raised, where both of us were born," the GOP hopeful told the crowd. "Ann was born in Henry Ford Hospital. I was born at Harper Hospital. No one's ever asked to see my birth certificate, they know that this is the place that we were born and raised."

Those Michigan Republicans laughed and cheered. They certainly weren't going to be set straight by the GOP's leadership in Congress.
On January 23, 2011, the new House Majority Leader Eric Cantor (R-VA) told Meet the Press host David Gregory he would not speak out against those "who think that his birth certificate is inauthentic."

GREGORY: Will you call that what it is, which is crazy talk?
CANTOR: [laughs] David, you know, a lot of that has been an issue sort of generated by not only the media but others in the country. Most Americans really are beyond that and they want us to focus -
GREGORY: Is somebody who brings that up engaging in crazy talk?
CANTOR: David I don't think it's nice to call anyone crazy, OK?

Of course, it was Speaker Boehner's job to tell the American people the truth. (To his credit, Boehner's successor Paul Ryan has been clear with his constituents in rejecting the Birther smear.) Now, it's Donald Trump's job to acknowledge the objective fact of Barack Obama's 1961 birth in Hawaii. He must either apologize to the President or defend the debunked conspiracy theory that made him a Republican favorite. Not talking about it isn't an option. After all, like his campaign itself, this is a simple question of black or white.