Trumpcare in Red and Blue

ive days after the presidential election, I wrote a concession message to Trump voters congratulating them for what they had won. To those Trump promised would get "sick of winning," I predicted, "You've won his 'big and beautiful' Obamacare replacement plan that will take away health insurance from 22 million Americans." If the president-elect and his GOP allies in Congress got their way, I suggested, "millions of people across America will have the opportunity for financial ruin and even needless death, and maybe both." And thanks to President Trump, "you could be one of them, especially if you live in a red state like Arkansas or Kentucky where Obamacare had the biggest impact in dramatically reducing the ranks of the uninsured."
Now that Congressional Republicans are facing a growing backlash as they struggle to pass their ever-changing American Health Care Act, I won't say I told you so. Instead, I will simply state that events have transpired exactly as I foretold. 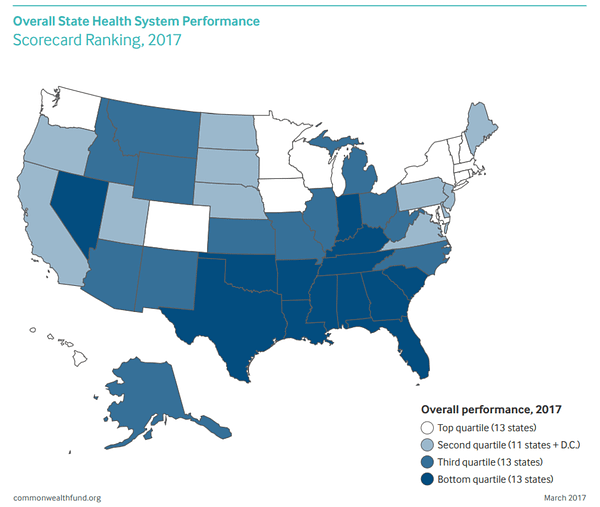 As it turned out, Paul Ryan's hand-picked director of the nonpartisan Congressional Budget Office (CBO) didn't merely reject the GOP myth that Obamacare was in a "death spiral." Much to the chagrin of President Trump, House Speaker Paul Ryan and Senate Majority Leader Mitch McConnell, the CBO forecast 24 million Americans would lose health insurance under the GOP plan over the next decade. Premiums would rise for both older and lower-income people. Under the AHCA, deductibles and out-of-pocket costs would invariably jump for all beneficiaries as increasingly inadequate tax credits force the older and sicker out of the market altogether. Adding insult to injury, Trumpcare's massive cuts to Medicaid spending will be used to fund an $880 billion tax cut windfall for the wealthy. The ultimate irony of the GOP's supposed replacement for the Affordable Care Act is that Trump voters will disproportionately lose their health coverage while blue state millionaires cash their checks from the United States Treasury.
Of course, that perverse outcome was known long before Republicans first began chanting "repeal and replace" seven years ago this week. That's because now, as it has been since what became Obamacare was first debated, the defining irony of GOP opposition to it has been this:

A trip back to 2009 shows why.
Continue reading at Daily Kos.