Trump's Tax Plan is a Laffer

Long before it mastered the mass production of "fake news," the Republican Party propagated its Ur-lie that "tax cuts pay for themselves." Almost from the moment that Arthur Laffer first sketched his now-famous curve on a napkin in 1974, right-wing pundits, politicians, and propagandists have declared as an article of faith the belief that tax cuts incentivize so much economic growth that revenues to Uncle Sam will be at least as high as they would have been without the reduction in rates. 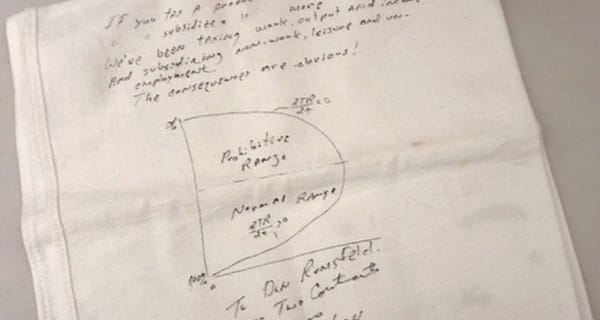 Unfortunately for the American people, four decades of supply-side snake oil have produced only mushrooming national debt and record-high income inequality. Far from paying for themselves, the Reagan and Bush tax cuts delivered a windfall only for the wealthy while unleashing oceans of red ink from the United States Treasury. (Of course, the other objective of draining Washington's coffers in order to add to the bulging bank accounts of the rich was to get government "down to the size where we can drown it in the bathtub.") It's no wonder that by 2015 even Keith Hall, the man hand-picked by the Republican majority on Capitol Hill to head the nonpartisan Congressional Budget Office (CBO), acknowledged the obvious:

"No, the evidence is that tax cuts do not pay for themselves. And our models that we're doing, our macroeconomic effects, show that."

Nevertheless, last week Treasury Secretary Steve Mnuchin unveiled the Trump administration's tax plan by proclaiming the fiscal equivalent of saying the sun rises in the west and sets in the east. Six days after first announcing "the plan will pay for itself with growth," Mnuchin told the White House press corps:

"This will pay for itself with growth and with the reduction of different deductions and closing loopholes."

In reality, it won't even be close.
Continue reading at Daily Kos.