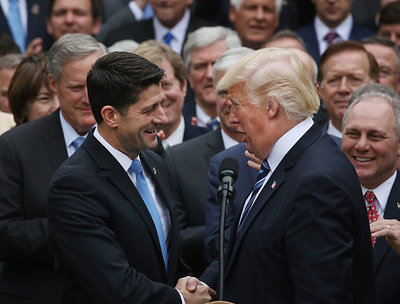 In the wake of the violence in Charlottesville, Virginia, Republicans were shocked--SHOCKED--to find that President Trump was providing air cover for neo-Nazis and white supremacists.
Declaring "there can be no moral ambiguity," House Speaker Paul Ryan tweeted, "White supremacy is repulsive. This bigotry is counter to all this country stands for." Mitt Romney, the GOP's 2012 failed presidential nominee, decried Trump's both-siderism, "One side is racist, bigoted, Nazi. The other opposes racism and bigotry." Nevada Sen. Dean Heller hit the keyboard to "condemn the outrageous racism, violence and hatred," calling it "unacceptable and shameful." South Carolina Sen. Lindsey Graham branded the white supremacists behind the murder of Heather Heyer "un-American" and "domestic terrorists" before pledging to "fight back against the idea that the Party of Lincoln has a welcome mat out for the David Dukes of the world." And Louisiana Rep. Steve Scalise, still recovering from the severe wounds he sustained in the terror attack against the Congressional Republican baseball team, announced "we must defeat white supremacy and all forms of hatred."
But before rushing to credit these and other Donald Trump allies for standing up to the real racist-in-chief, bear in mind that this is a textbook case of too little, too late. Laudable though these statements are, talk is cheap. After all, in recent years each of the five Republicans listed above had ample opportunities to denounce right-wing terrorism, reject casual race-baiting, and eject white supremacists from the ranks of their party. Yet it was no accident that they were silent and seated when it mattered most. That's because for more than 50 years, the GOP has relied on its "Southern Strategy" combining incendiary racial rhetoric, zealous xenophobia, and even Confederate idolatry to manufacture a terrified and furious white majority, and not just in the Solid South. Until today's "concerned" Republicans cast out Donald Trump and cast off the politics of white resentment, they should get no credit where none is due.
Continue reading at Daily Kos.