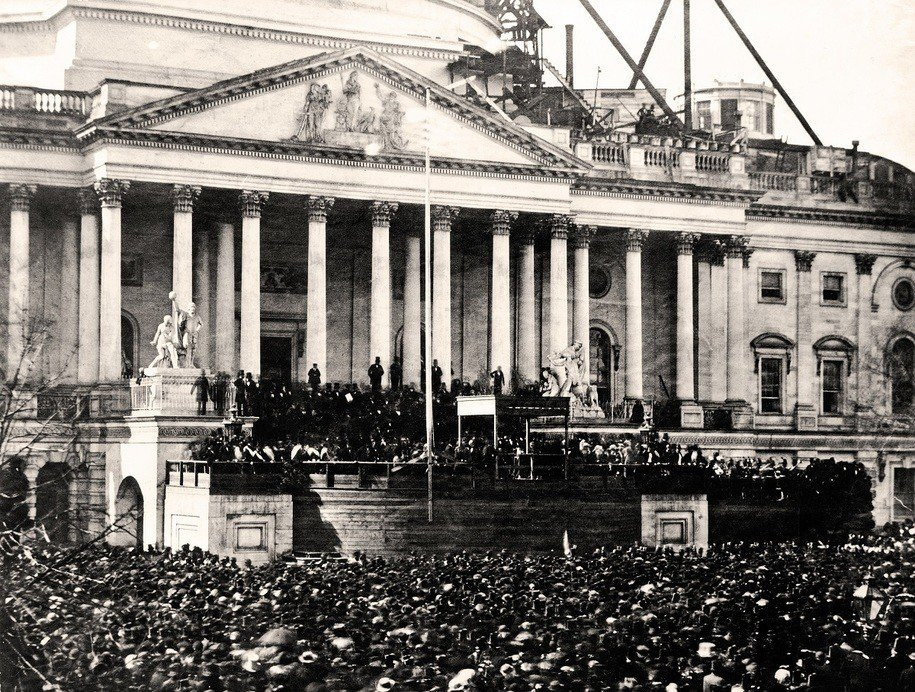 One day after he cast his historic vote to remove President Donald Trump office, Utah Senator and former GOP presidential nominee Mitt Romney has continued to receive accolades for his principled and lonely stand. But Romney didn't merely buck his Party of Lincoln in becoming the first Senator to ever vote to convict an impeached president from his own party. As it turns out, the would-have-been 45th President made his case by summoning some of the finest rhetoric from the 16th.

In his powerful and moving speech, Senator Romney warned that President Trump's corrupt actions posed a threat to American democracy. As he explained to Atlantic staff writer and fellow Mormon McKay Coppins, Trump's "egregious an act against the Constitution--and one's oath" is "what autocrats do." And taking one's oath seriously, especially during a time of national peril, mattered very much to Mitt Romney. "As a senator-juror, I swore an oath before God to exercise impartial justice," Romney declared. "I take an oath before God as enormously consequential."

But my promise before God to apply impartial justice required that I put my personal feelings and political biases aside. Were I to ignore the evidence that has been presented and disregard what I believe my oath and the Constitution demands of me for the sake of a partisan end, it would, I fear, expose my character to history's rebuke and the censure of my own conscience.

I'm aware that there are people in my party and in my state who will strenuously disapprove of my decision, and in some quarters I will be vehemently denounced. I'm sure to hear abuse from the president and his supporters. Does anyone seriously believe that I would consent to these consequences other than from an inescapable conviction that my oath before God demanded it of me?

If the courage to deny Trump's GOP the unanimity it routinely demands is increasingly rare, so, too, is fidelity to the namesake of the Party of Lincoln. And in remarks on Wednesday, Romney echoed Abraham Lincoln during another time of peril to the Union.

In his First Inaugural Address on March 4, 1861, President Lincoln spoke to his rapidly fracturing nation. As the departing Southern states beat the drums of war, Liincoln declared, "I take the official oath to-day with no mental reservations and with no purpose to construe the Constitution or laws by any hypercritical rules." And he took that oath to a Constitution of the United States under which secession by a state or states is inherently lawless:

I hold that in contemplation of universal law and of the Constitution the Union of these States is perpetual. Perpetuity is implied, if not expressed, in the fundamental law of all national governments. It is safe to assert that no government proper ever had a provision in its organic law for its own termination. Continue to execute all the express provisions of our National Constitution, and the Union will endure forever, it being impossible to destroy it except by some action not provided for in the instrument itself.

In his famous conclusion to his Address, President Abraham Lincoln warned the Confederates that he had sworn an oath to God to defend the Constitution of the nation they would rip asunder:

In your hands, my dissatisfied fellow-countrymen, and not in mine, is the momentous issue of civil war. The Government will not assail you. You can have no conflict without being yourselves the aggressors. You have no oath registered in heaven to destroy the Government, while I shall have the most solemn one to "preserve, protect, and defend it."

I am loath to close. We are not enemies, but friends. We must not be enemies. Though passion may have strained it must not break our bonds of affection. The mystic chords of memory, stretching from every battlefield and patriot grave to every living heart and hearthstone all over this broad land, will yet swell the chorus of the Union, when again touched, as surely they will be, by the better angels of our nature. [Emphasis mine.]

Now, the American crisis confronting Mitt Romney's is not nearly as serious--yet--as the one Lincoln faced. But Senator Romney had a moral obligation during Wednesday's impeachment trial vote that Lincoln did not. Over the previous decade, Mitt Romney was not only complicit in Donald Trump's rise to power, but baselessly accused President Barack Obama of the very kind of wrongdoing contained in the Article 1 charge of abuse of power by President Trump.

Recall the history of Romney's failed 2012 run for the White House. Despite The Donald's on-going "Birther" fraud, Romney gladly accepted Trump's endorsement and involvement in campaign fundraising events. When the Presidency was still within Mitt Romney's reach, his principles were not:

"You know, I don't agree with all the people who support me, and my guess is they don't all agree with everything I believe in. But I need to get 50.1 percent or more, and I'm appreciative to have the help of a lot of good people."

The Romney campaign, too, casually trafficked in the Birtherism slander advanced by Trump. Romney and his surrogates repeatedly referred to Barack Obama and his policies as "extraordinarily foreign." At one point, son Matt Romney brushed off demands his father release his tax returns this way: "I heard someone suggest the other day that as soon as President Obama releases his grades and birth certificate ...then maybe he'll do it." In August 2012, Governor Romney himself got in the act during a rally in Michigan:

"Now I love being home in this place where Ann and I were raised, where both of us were born," the GOP hopeful told the crowd. "Ann was born in Henry Ford Hospital. I was born at Harper Hospital. No one's ever asked to see my birth certificate, they know that this is the place that we were born and raised."

If that wasn't sufficiently disgusting, Romney's slanderous charges against President Obama definitely were. After the March 2012 open microphone non-scandal with President Dmitri Medvedev, Governor Romney falsely claimed President Obama of believing "the best interests of America are to bow to the interests of Russia." Worse still, on the very same day as the terror attack in Benghazi which killed U.S. Ambassador Christopher Stephens and three American security personnel, Romney stooped to a new low.

"It's disgraceful that the Obama administration's first response was not to condemn attacks on our diplomatic missions, but to sympathize with those who waged the attacks."

While Romney opted against another run in 2016, Mitt seemed to hold out hope that Republican voters would recoil in horror from Donald Trump and instead anoint him as their white knight. By March 2016, Governor Romney turned both barrels at Donald Trump. But every grenade he lobbed at Trump--that he was trying to conceal his tax returns, that he profited from failed businesses, that he trafficked in racial bigotry and was fundamentally untrustworthy--were the same ones that blew up Romney's own 2012 campaign.

To be sure, Mitt Romney deserves credit for his vote on Wednesday and for the powerful words explaining it. His was a lonely voice in a party that demands lockstep conformity. His vote ensured that Democrats can forever call the votes to convict Donald Trump "bipartisan." And in a party that long ago abandoned the philosophy and inspiration of Abraham Lincoln, Senator Romney's words recalled the better angels of its nature. But what also cannot be forgotten is that of all the Republicans Senators, Mitt Romney had by far the greatest moral obligation to demand Donald Trump's removal for sins he alleged had been committed by Barack Obama. In doing what decency required of him, Senator Romney was lauded for his "courage." It would be more accurate to simply record that Mitt Romney finally, at long last, atoned for sins of his own.