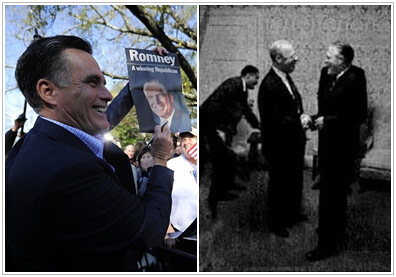 Back in the spring of 2012, right-wingers began foaming at the mouth when the late Andrew Breitbart revealed that then Illinois State Senator Obama was part of panel discussion after a 1998 play about 1960's radical organizer Saul Alinsky. Now, the same conservatives are hyperventilating about the correspondence between the young Hillary Clinton and Alinsky, an ally with whom she parted company in 1969.
Of course, the Republican rage is more than a little ridiculous. After all, Tea Party faithful including Breitbart Youth James O'Keefe boasted of their use of Alinsky's tactics during their ferocious if failed campaign to stop health care reform in 2009. And as it turns out, Mitt Romney's beloved father and Michigan Governor George Romney not only met with Alinsky back in 1967, but largely agreed with his message.
As Andrew Kaczynski first noted (and Tucker Carlson's Daily Caller also reported), Michigan Governor George Romney met with Alinsky in the wake of the devastating Detroit riots. While the Library of Congress has photographs of that meeting, author T. George Harris described the tete-a-tete in his 1967 book, Romney's Way:

When slum organizer Saul Alinsky, with the West Side Organization's militant Negroes and clerics, wanted to meet with the white Detroit rulers, Romney indirectly arranged the meeting, and attended. Democratic Mayor Jerome Cavanaugh avoided the rough company.
"I think you ought to listen to Alinsky," Romney told his reluctant white friends. 'It seems to me that we are always talking to the same people. Maybe the time has come to hear new voices." Said an Episcopal bishop, 'He made Alinsky sound like a Republican.'"

To be sure, George Romney has had an outsized impact on his son. Mitt Romney didn't just call himself just "a guy from Detroit," but spoke passionately of joining his father for the 1946 Golden Jubilee in his home city. (Unfortunately for Mitt, that event occurred the year before he was born.) And Mitt didn't just recall his dad as "a lath and plaster man could work his way up to running a little car company called American Motors and end up Governor of a state where he had once sold aluminum paint," but remembered important rules of the road from him as well:

"I happened to see my dad run for governor when he was 54 years old," said Romney. "He said, 'Mitt, never get involved in politics if you have to win election to pay a mortgage.' If you find yourself in a position when you can serve, you ought to have a responsibility to do so if you think you can make a difference."

Of course, during his first run for the White House Mitt Romney repeatedly claimed that he also "saw" his father march with Martin Luther King, Jr. While Mitt later admitted his "figure of speech" was not literally true, he countered that "I think the thing that's relevant is that my dad was a champion in the civil rights movement, that he aligned himself with Martin Luther King."
That kind of activism wouldn't win George Romney any friends among today's Tea Partiers. Nor, as Rick Perlstein pointed out, would this Alinskyesque quote:

As a CEO he would give back part of his salary and bonus to the company when he thought they were too high. He offered a pioneering profit-sharing plan to his employees. Most strikingly, asked about the idea that "rugged individualism" was the key to America's success, he snapped back, "It's nothing but a political banner to cover up greed."

As it turns out, neither George Romney's son nor his political party would listen to that kind of message today. But in an important sense, the Republican Party including its Breitbart shock troops followed George Romney's 1967 admonition, "I think you ought to listen to Alinsky."
As Politico reported in September 2009, the Tea Party's manufactured campaign against the Obama administration appropriated Saul Alinsky's methods if not his message:

The 1971 agitator's handbook "Rules for Radicals" -- written by Saul Alinsky, the Chicago community organizer who was the subject of Hillary Clinton's senior thesis, and whose teachings helped shape Barack Obama's work on Chicago's South Side -- has been among Amazon's top 100 sellers for the past month, put there in part by people who "also bought" books by Michelle Malkin, Glenn Beck, and South Carolina Republican Sen. Jim DeMint.
Yes, the same folks who brought you Obama the socialist have been appropriating the words and ways of leftists past -- and generally letting their freak flags fly...
James O'Keefe, the activist and filmmaker who posed as a pimp for an expose of several ACORN offices in the Northeast, told the New York Post earlier this week] that he, too, had been inspired by "Rules for Radicals," which includes such tactical lessons as "Ridicule is man's most potent weapon" and "Make the enemy live up to their own book of rules."

Among those conservative rules, apparently, is spouting dark warnings of dangerous - if spurious - ties between President Obama and peripheral figures in his own or his father's life. Of course, Newt Gingrich's ridiculous claim that "Saul Alinsky radicalism is at the heart of Obama" is no more true of the President than it is of Mitt Romney. Then again, as Bill Moyers and Alinsky chronicler Hillary Clinton pointed out:

"Much of what Alinsky professes does not sound 'radical."... His are the words used in our schools and churches, by our parents and their friends, by our peers. The difference is Alinsky really believes in them and recognizes the necessity of changing the present structures of our lives in order to realize them."

All of which explains why, as the Wall Street Journal reported, Andrew Breitbart's allies at FreedomWorks not only give Mr. Alinsky's "Rules for Radicals" to its top leadership members, but distribute an abridged version to its entire network.