Over the past couple of weeks, the Trump administration and its allies have been engaging in a lot of wishful thinking. Fresh off the strong second quarter economic growth number of 4.1 percent, Trump told a gathering of business leaders next quarter "could be in the fives." Not content to rest there, the President echoed his campaign pledge by proclaiming, "I really think we can go much higher than in the fives once we get trade deals that are rational, and sane, and good to our country." Meanwhile, NBC News reported Team Trump marked the one-year anniversary of its proposal to slash legal immigration in half by revealing it will seek to "make it harder for legal immigrants to become citizens or get green cards if they have ever used a range of popular public welfare programs, including Obamacare." That was doubtless music to the ears of Fox News host Laura Ingraham:

"In some parts of the country, it does seem like the America we know and love don't exist anymore. Massive demographic changes have been foisted upon the American people. And they're changes that none of us ever voted for and most of us don't like."

Well, as Mick Jagger famously put it, "You can't always get what you want." 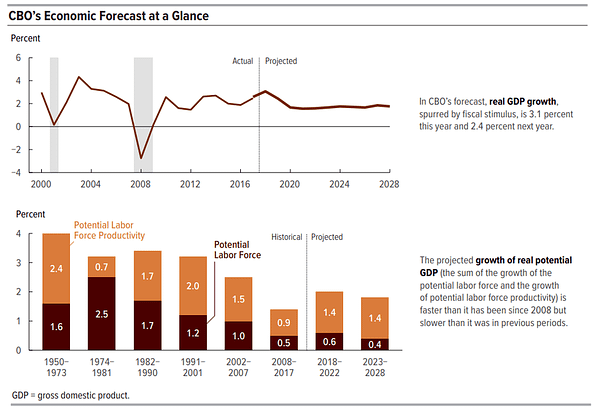 That was the message--both direct and indirect--from the nonpartisan Congressional Budget Office (CBO) this week. While America's budget scorekeeper forecast annual, inflation-adjusted gross domestic product (GDP) will expand by 3.1 percent for this year, "in 2019, the pace of GDP growth slows to 2.4 percent in the agency's forecast as growth in business investment and government purchases slows." Worse still, as the top chart above reflects, "from 2023 to 2028, real GDP is projected to grow by about 1.7 percent each year." And that's a real problem for a president who promised to "to create 25 million new American jobs in the next decade and return to 4 percent annual economic growth." After all, to hit those targets (see the second chart above), Donald Trump will have to oversee a massive jump in productivity or a huge expansion in the labor force. And that means a lot more immigration, not less.
To fully appreciate the magnitude of Trump's conundrum, a little historical context is in order: No American president since Lyndon Johnson averaged 4 percent GDP growth over his tenure in office.