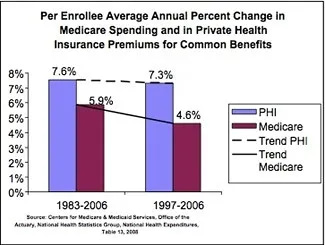 Today, the Congressional Budget Office (CBO) confirmed the obvious about Paul Ryan's plan to end Medicare as we know it. The GOP plan to "voucherize" and inevitably ration Medicare would lead to future seniors paying more - much more - for health insurance. Of course, killing the wildly popular program which helped dramatically reduce poverty among the elderly is no problem for the Republicans. After all, they've been at it for 50 years.
When Rep. Ryan first introduced his Roadmap for America's Future, analysts were quick to point out that his plan to convert the single-payer insurance program for 46 million Americans into a voucher system would quickly lead to rationing. By slashing $3 trillion in funding, leaving beneficiaries at the whim of private insurers whose policies cost more and are padded by substantially higher overhead, and capping the value of their vouchers, Ryan's budget proposal unveiled this week would produce dire consequences.
On Wednesday, the CBO agreed, concluding, "A typical beneficiary would spend more for health care under the proposal." Make that, as Director Douglas Elmendorf explained, a lot more.

Under the proposal, most elderly people who would be entitled to premium support payments would pay more for their health care than they would pay under the current Medicare system. For a typical 65-year-old with average health spending enrolled in a plan with benefits similar to those currently provided by Medicare, CBO estimated the beneficiary's spending on premiums and out-of-pocket expenditures as a share of a benchmark amount: what total health care spending would be if a private insurer covered the beneficiary. By 2030, the beneficiary's share would be 68 percent of that benchmark under the proposal, 25 percent under the extended-baseline scenario, and 30 percent under the alternative fiscal scenario.

Of course, the Ryan scenario of an America without Medicare is one Republicans have been pushing since the program's inception in the 1960's.
As ThinkProgress noted two years, Republican demagoguery on Medicare has a long and sordid past. While George H.W. Bush in 1964 used the now-eternal sound bite to describe it simply as "socialized medicine," Ronald Reagan warned three years earlier that failure to stop Medicare meant " you and I are going to spend our sunset years telling our children and our children's children what it once was like in America when men were free."
But even as they savaged Democrats with charges of "death panels" which would "pull the plug on grandma" and see seniors "put to death," a long and growing list of Republicans had been lining up for months behind Congressman Ryan's plan to ration Medicare. They just waited until after the 2010 midterm elections were safely won to make it the official platform of the Republican Party.
As Steve Benen detailed in the Washington Monthly in the fall of 2009:

In April, 137 Republicans voted in support of a GOP alternative budget. It didn't generate a lot of attention, but the plan, drafted by the House Budget Committee's Rep. Paul Ryan (R-Wis.) called for "replacing the traditional Medicare program with subsidies to help retirees enroll in private health care plans."
The AP noted at the time that Republican leaders were "clearly nervous that votes in favor of the GOP alternative have exposed their members to political danger."

Nevertheless, calls from leading Republicans to euthanize the wildly popular Medicare program came fast and furious. In September, death panel inventor Sarah Palin penned a Wall Street Journal op-ed which similarly called for "providing Medicare recipients with vouchers that allow them to purchase their own coverage." The next month, Georgia Rep. Paul Broun proposed legislation that would roll back the Medicare system and replace it with a system of vouchers that seniors could use to purchase private insurance or put into tax-free medical savings accounts.
Palin and Broun had plenty of company. Within a span of a few days in 2010, Michele Bachmann (R-MN) echoed Marsha Blackburn (R-TN) by insisting "what we have to do is wean everybody" off Medicare and Social Security. Then, Missouri Senator Kit Bond similarly argued that Medicare enrollees should be given a voucher to buy health insurance on their own. And days later, Broun's Georgia GOP colleague Jack Kingston told Fox Business:

"We need to go in, and we need to cut duplicate programs, programs that are inefficient, programs that are expanding the entitlement mentality. I think we should go back to Social Security, take it off budget, dedicate the funds, put personal accounts on it. On Medicare, I think something like vouchers, where people actually have an incentive to save money."

Of course, as Ezra Klein, Matthew Yglesias and TPM (among others) noted, this new Republican deficit reduction gambit would inevitably lead to the rationing of Medicare.
Because the value of Ryan's vouchers fails to keep up with the out-of-control rise in premiums in the private health insurance market, America's elderly would be forced to pay more out of pocket or accept less coverage. The Washington Post's Klein described the inexorable Republican rationing of Medicare which would then ensue:

Last year, Ryan acknowledged as much. Sadly for the Republican brain trust, he failed to follow the GOP script that only Democratic reforms lead to "health care denied, delayed and rationed."

Of course, Ryan left out the real culprit - the private insurance market. But with 50 million uninsured, another 25 million underinsured, one in five American postponing needed care and medical costs driving over 60% of personal bankruptcies, Congressman Ryan is surely right that "rationing happens today."
If this all sound familiar, it should. The Republican Party which tried to abort Medicare in the 1960's is now simply trying to smother it to death.

The words of Republicans past and present tell the tale. Before his later canonization by the GOP faithful, Ronald Reagan announced in 1961 that the failure to stop Medicare meant "you and I are going to spend our sunset years telling our children and our children's children what it once was like in America when men were free." Three years later, his future successor George H.W. Bush decried it as "socialized Medicine." Last July, Missouri's Roy Blunt argued that "government should have never gotten into the health care business." That same month, Georgia Rep. Tom Price, a one-time orthopedic surgeon and current chairman of the Republican Study Group, proclaimed:

"Going down the path of more government will only compound the problem. While the stated goal remains noble, as a physician, I can attest that nothing has had a greater negative effect on the delivery of health care than the federal government's intrusion into medicine through Medicare."

When asked at a rally last month, Rep. Price refused to defend Medicare after stating "we will not rest until we make certain that government-run health care is ended."
Throughout the 1990's, Newt Gingrich, Mitch McConnell and their Republican colleagues continued the GOP war on Medicare. Hoping to slowly but surely undermine the program by shifting its beneficiaries to managed care and private insurance, in 1995 McConnell was among the Republican revolutionaries backing Gingrich's call to slash Medicare spending by $270 billion (14%) over seven years. As Gingrich put it then:

"We don't want to get rid of it in round one because we don't think it's politically smart," he said. "But we believe that it's going to wither on the vine because we think [seniors] are going to leave it voluntarily."

When President Clinton and his Democratic allies in Congress rushed to defend Medicare from the Republican onslaught, Gingrich launched a blistering assault:

"Think about a party whose last stand is to frighten 85-year-olds, and you'll understand how totally morally bankrupt the modern Democratic Party is."

Of course, when it comes to Medicare, moral bankruptcy is the sin of Republicans alone. As Paul Krugman lamented last year:

"Don't cut Medicare. The reform bills passed by the House and Senate cut Medicare by approximately $500 billion. This is wrong." So declared Newt Gingrich, the former speaker of the House, in a recent op-ed article written with John Goodman, the president of the National Center for Policy Analysis.
And irony died.

That irony is all the more painful because today's senior citizens, the only age group to back John McCain in the 2008 election, paved the way for the new Republican House majority. Terrified by a relentless GOP campaign about supposed Democratic cuts to Medicare, the elderly by a 59% to 38% margin chose Republicans to kill the program instead.