Just in time for the Fourth of July, Gallup released the results of its latest survey of patriotism. Its primary finding?

For the first time in Gallup's 18-year history asking U.S. adults how proud they are to be Americans, fewer than a majority say they are "extremely proud." Currently, 47% describe themselves this way, down from 51% in 2017 and well below the peak of 70% in 2003.

That revelation produced two predictable reactions among press and pundits. The first was to highlight the taint of Trump. CNBC's John Harwood warned that the numbers "reflect the unique challenge Donald Trump's presidency poses to modern America," including "his brand of 'America First' populism [which] threatens institutions built and sustained by every other president since World War II, for the benefit of America and other nations alike." In the Washington Post, Emily Guskin lamented the Gallup and other polling which present "an image that is largely negative or deteriorating. Americans are less proud of their country and the way its democracy works, and they show persistently weak trust in government and many major institutions." 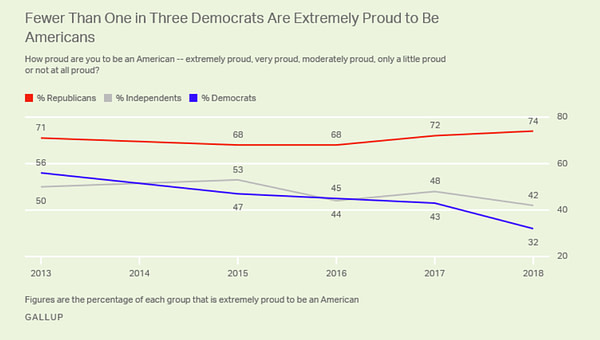 But among the right-wing blogosphere and conservative commentariat, the details behind the top line number provided yet another opportunity for tired tropes with titles like "Why Do Democrats Hate America?" Powerline's John Hinderaker declared, "It is common knowledge that patriotic Americans tend to be Republicans, while unpatriotic Americans tend to be Democrats," adding, "According to the latest Gallup poll, the gulf between the parties is widening." His colleague Paul Mirengoff agreed, explaining:

Brit Hume of Fox News concurred with this assessment of a supposed "patriotism gap," charging that "only about a third of Democrats now say they love the country." He settled on that formula only after deleting a tweet declaring "hate may be a strong word but they sure don't love it."
Now, there are a couple of problems with this slander...
Continue reading at Daily Kos.