A new study released this week revealed that Americans' health care varies dramatically from state to state. It should come as no surprise that in general Southern states ranked at the bottom in almost every category. After all, whether the issue is health, education, working conditions, or virtually any indicator of social pathology, things are worst in precisely those states that voted for George W. Bush.
The Commonwealth Fund report, "Aiming Higher: Results from a State Scorecard on Health System Performance," examined states' performance across 32 indicators of health care access, quality, outcomes and hospital use. Topping the list were Hawaii, Iowa, New Hampshire, Vermont and Maine. Bringing up the rear were the Bush bastions of Kentucky, Louisiana, Nevada, Arkansas, Texas, with Mississippi and Oklahoma. The 10 worst performing states were all solidly Republican in 2004.
The extremes in health care performance are startling. For example, 30% of adults and 20% of children in Texas lacked health insurance, compared to 11% in Minnesota and 5% in Vermont, respectively. Premature death rates from preventable conditions were almost double (141.7 per 100,000 people) in Tennessee, Arkansas, Louisiana and Mississippi compared to the top performing states (74.1 per 100,000). Adults over 50 receiving preventative care topped 50% in Minnesota compared to only 33% in Idaho. Childhood immunizations reached 94% in Massachusetts, compared to just 75% in the bottom five states. As the report details, federal and state policies, such as insurance requirements and Medicaid incentives, clearly impact health care outcomes.

But health care isn't the only area where denizens of the Republican heartland suffer relative to their blue state brethren. As Perrspectives detailed in January, minimum wage levels also vary significantly from state to state. Unsurprisingly, many of the "bluest" states lead the way in exceeding both the previous ($5.15 an hour) and recently passed ($7.25) federal requirements, with Washington, Oregon, California, Vermont, Massachusetts, Rhode Island and Connecticut mandating wages as high as $7.93. Only one of the 21 states (New Hampshire) mired at $5.15 an hour did not vote for George W. Bush in 2004. (Click here to view a map of the minimum wage by state.)
And the minimum wage is just the beginning. A December 2005 report Political Economy Research Institute at the University of Massachusetts showed that Americans' working conditions in general closely follow the 2004 electoral map. The report's Work Environment Index (WEI) rated the quality of Americans' working lives by a weighting of three factors: job opportunities, job quality, and job fairness. The top five states were Delaware, New Hampshire, Minnesota, Vermont and Iowa, the bottom five were South Carolina, Utah, Arkansas Texas and Louisiana. Unsurprisingly, all five of the cellar-dwellers are so-called "Right-to-Work" states featuring outright hostility towards union organizing. (Click the following links for maps of WEI by state and right-to-work states.)
When it comes to educational achievement, faithful red state Republicans do a little (but not much) better. Earlier this year, the U.S. Chamber of Commerce released a study titled "Leaders and Laggards: A State-by-State Report Card on Educational Effectiveness." The report looked at seven different performance categories, including return on education investment, workforce readiness, teacher skills, and academic achievement of low-income and minority students. Again, the top five states (Massachusetts, Minnesota, New Hampshire, Vermont and New Jersey) backed Democrat John Kerry in 2004. Only two of the bottom 15 states similarly supported Kerry. 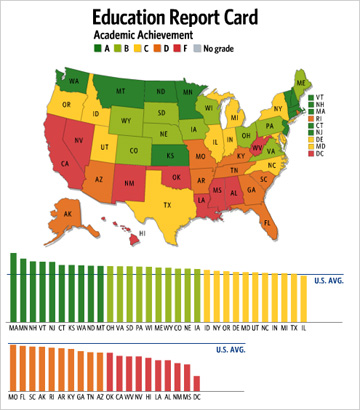 The same dismal pattern applies to a wide array of measures of social dysfunction and pathology. 8 of the top 10 states with the highest murder rates are squarely in Red America. 7 of the 10 states with the lowest murder rates were in the Kerry column. (Interestingly, six of those states have no death penalty statute.) The 10 states with the highest divorce rates in 1998 all went for Bush in 2004. Red states constituted 9 on the top 10 in terms of out-of-wedlock births. And the Bible Belt has the greatest percentage of births to women under age 20, with the worst 15 states nationwide all among in the GOP ranks. By almost any measure of societal breakdown that so-called Republican "values voters" decry, it is Red State America where moral failure is greatest.
There are, of course, many explanations for the abysmal lifestyles and living conditions in the Republican strongholds. Poverty, age and homogeneity clearly matter. But when it comes to living standards, culture, politics and public policy are at least as important.
If the Republican electoral map closely correlates with social dysfunction, it is frequent church attendance which strongly predicts Republican party preference. Which is probably a good thing. Because if you live in a state that voted for George W. Bush, you're going to need all the help you can get.
UPDATE: In a further irony, Republicans in the Senate will likely block the Employee Free Choice Act (EFCA) from coming to a vote this week. Once again, it is red state workers who need EFCA most.