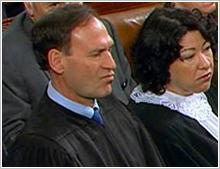 While legal analysts like Glenn Greenwald and Jonathan Turley lamented Justice Samuel Alito's "serious and substantive breach of protocol" during last night's State of the Union address, conservatives are predictably apoplectic about President Obama's temerity in questioning the Supreme Court's campaign finance decision in that setting. As it turns out, the right-wing hypocrisy in defense of Alito is double. After all, President Bush didn't just routinely use the State of the Union to castigate "activist judges." For years, Bush's amen corner in the conservative movement threatened judges to bring them in line.
Bush's Supreme politicking during his State of the Union speeches was a regular fixture of his presidency. For three straight years (2004, 2005 and 2006), President Bush denounced "activist judges" and insisted "for the good of families, children and society, I support a constitutional amendment to protect the institution of marriage." On the very day Samuel Alito joined the Robert Court, Bush used his 2006 SOTU for a victory lap:

"The Supreme Court now has two superb new members -- new members on its bench: Chief Justice John Roberts and Justice Sam Alito. I thank the Senate for confirming both of them. I will continue to nominate men and women who understand that judges must be servants of the law and not legislate from the bench."

Nevertheless, Republican leaders feigned outrage over President Obama's criticism Wednesday of the Court's Citizens United decision last week. Utah Senator Orrin Hatch called it "rude," adding "It's one thing to say that he differed with the court but another thing to demagogue the issue while the court is sitting there out of respect for his position." Texan John Cornyn took it a step further, calling Obama's strong disagreement with the Court "hysterical" and insisting:

"I don't think the president should have done what he did in trying to call out the Supreme Court for doing its job. They are the final word on the meaning of the United States Constitution, even when we don't like the outcome."

Of course, back in 2005, John Cornyn was one of the GOP standard bearers in the conservative fight against so-called "judicial activism" in the wake of the Republicans' disastrous intervention in the Terri Schiavo affair. On April 4th, Cornyn took to the Senate floor to issue a not-too-thinly veiled threat to judges opposing his reactionary agenda. Just days after the murders of one judge in Atlanta and the family members of another in Chicago and Atlanta, former Texas Supreme Court Justice Cornyn offered his endorsement of judicial intimidation:

"I don't know if there is a cause-and-effect connection, but we have seen some recent episodes of courthouse violence in this country...And I wonder whether there may be some connection between the perception in some quarters, on some occasions, where judges are making political decisions yet are unaccountable to the public, that it builds up and builds up and builds up to the point where some people engage in, engage in violence."

Facing criticism for his remarks seemingly endorsing right-wing retribution against judges, Cornyn held his ground. "I didn't make the link," he said on Fox News Sunday, adding with a note of sarcasm:

As it turns out, Cornyn was merely echoing the words of the soon-to-be indicted House Majority Leader Tom Delay. On March 31st, Delay issued a statement regarding the consistent rulings in favor of Michael Schiavo by all federal and state court judges involved:

"The time will come for the men responsible for this to answer for their behavior, but not today."

As the New York Times reported:

Saying that the courts ''thumbed their nose at Congress and the president,'' Mr. DeLay, of Texas, suggested Congress was exploring responses and declined to rule out the possibility of Congressional impeachment of the judges involved.

The impact of tacit conservative endorsement of violence against judges cannot be dismissed. After all, it extends to members of the Supreme Court of the United States. In March 2006, Justice Ruth Bader Ginsburg revealed that she and Justice Sandra Day O'Connor were the targets of death threats. On February 28th, 2005, the marshal of the Court informed O'Connor and Ginsburg of an Internet posting citing their references to international law in Court decisions (a frequent whipping boy of the right) as requiring their assassination:

"This is a huge threat to our Republic and Constitutional freedom...If you are what you say you are, and NOT armchair patriots, then those two justices will not live another week."

Neither O'Connor nor Ginsburg were shy about making the connection between Republican rhetoric of judicial intimidation and the upswing in threats and actual violence against judges. While Ginsburg noted that they "fuel the irrational fringe," O'Connor blamed Cornyn and his fellow travelers for "creating a culture" in which violence towards judges is merely another political tactic:

"It gets worse. It doesn't help when a high-profile senator suggests a 'cause-and-effect connection' [between controversial rulings and subsequent acts of violence]."

Of course, O'Connor and Ginsburg weren't the only targets of right-wing retribution, serious or otherwise. After sentencing Scooter Libby to 30 months in prison in 2007, Judge Reggie Walton reported receiving death threats. That episode followed a January 2006 joke by best-selling conservative author and media personality Ann Coulter, who mused in January 2006, "We need somebody to put rat poisoning in Justice Stevens' creme brulee."
As reaction to the Supreme Court's Citizens United v. FEC ruling showed, judicial activism like beauty is in the eye of the beholder. But as John Cornyn, Tom Delay and their fellow travelers at right-wing "Justice Sunday" and "Values Voter" events reveal time and again, judicial intimidation is the province of Republicans alone.

2 comments on “After Threatening Judges, Republicans Rush to Alito's Defense”