That 14 state attorneys general - 13 of them Republicans - have brought a lawsuit to stop the health care reform legislation signed into law Tuesday by President Obama is a perfect reflection of today's GOP. It not only confirms the Republican Party's longstanding mantra of "judicial activism for me, not thee." The suit, which challenges the individual insurance mandate originally proffered by Republicans, would require the Supreme Court to eviscerate over 200 years of precedent regarding the Commerce Clause and the supremacy of the federal government. (That's a stretch, even for the radical John Roberts.) Less surprising is that those AG's represent some of the states with the worst health care in America. 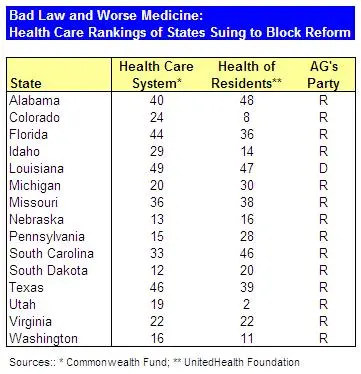 As two recent studies confirm, the opposition to health care reform is loudest from those GOP leaders whose constituents need it most. In October, the Commonwealth Fund released its 2009 state health care scorecard and the news for Grand Old Party was hardly grand. While nine of the top 10 performing states voted for Barack Obama in 2008, four of the bottom five (including Arkansas, Mississippi, Oklahoma and Louisiana) and 14 of the last 20 backed John McCain. That at least is an improvement from the 2007 data, in which all 10 cellar dwellers had voted for George W. Bush three years earlier. (For the detailed rankings, see the chart here.)

And Haley Barbour's Mississippi brought up the rear when it came to the health of its residents. In November, a study by funded by UnitedHealth brought some unwelcome news for the GOP braintrust: the red states they represent are the unhealthiest in the nation. The 2009 rankings of 22 indicators of health revealed that nine of the top 10 healthiest states voted for Barack Obama in 2008. Conversely, 9 of the 10 cellar dwellers backed John McCain in 2008; four years earlier, the 15 unhealthiest states voted for George W. Bush for President. (For the rankings, see the chart here.)
No state ranked among the Commonwealth Fund's 10 best for overall health care access, quality, outcomes and hospital use joined the AG's suit. And for her part, Washington Governor Christine Gregoire was seething (video here) with the state's Republican attorney general, Robert McKenna:

That Gregoire has promised to file a brief supporting the legislation to bring improved health care to the reddest states in America is doubly ironic. Washington not only has one of the better systems in the nation (rated 16th), but like most blue states already sends far more in tax dollars to the federal government than it receives in return.
Meanwhile, Alabama (40), Florida (44), South Carolina (33) and Texas (46) are among the states leading the battle to deny their residents the reforms they so badly need. While their odds of success in the courtroom are low, these grandstanding Republicans remain committed to preventing their states' residents from getting the health care they are literally dying to have.