Six years after the start of the Great Recession, there should be little disagreement what America's number one domestic priority should be. With unemployment still stuck around 7 percent four plus years after that recession was declared "over," creating jobs has to be Job #1. That urgency is underscored by the new analyses warning that the massive downturn that has cost America trillions in lost economic output will likely cost trillions more in what might be called a "permanent slump," one that is putting the future prospects for younger workers--and the entire nation--in deep peril.
Yet instead of pursuing pro-growth policies that ultimately are best route to reducing national debt, government at all levels has embraced austerity that to date has cost the U.S. economy at least two million jobs. The $1.2 trillion, decade-long budget sequester, which Republicans led by Senate Minority Leader Mitch McConnell, will only make things worse.
And that fixation is more than a little ironic, especially given House Speaker John Boehner's proclamation earlier this year that "we have no immediate debt crisis." Boehner is surely right. After all, federal spending is lower now and the annual budget deficit down to about half of what it was when Barack Obama first took the oath of office in January 2009. With the national debt as a percentage of U.S. GDP stable for the rest of the decade, America simply does not have a serious debt challenge in the near or even medium term.
As it turns out, the United States may not have a long-term debt problem, either. If the recent drop-off in the rate of growth of health care spending--the single largest driver of federal deficits--continues, the dire warnings about oceans of red ink 20 years from now simply will not come to pass.

A quick glance at the September long-term budget forecast (chart above) from the nonpartisan Congressional Budget Office (CBO) begins to explain why. As a percentage of the American economy, discretionary spending (that is, outlays outside of mandatory expenditures on Medicare, Medicaid, Social Security and interest on the national debt) will drop from roughly 9 to 7 percent by 2038. Non-defense discretionary spending (that is, education, infrastructure, R&D, transportation, foreign aid, and welfare and just about everything else) is already on a path to plummet to levels not seen since the 1950's. Even with America's rapidly aging population, over the next generation Social Security is forecast to grow from around 4 to 6 percent of GPD. With relatively minor policy changes--like raising or eliminating the $107,000 income cap on payroll taxes--Social Security's longevity can be secured. The real challenge to getting Uncle Sam's fiscal house in order in the decades to come, as Ezra Klein explained last year, is clear:

It's all about health care. Spending on Social Security is expected to rise, but not particularly quickly. Spending on everything else is actually falling. It's health care that contains most all of our future deficit problems. And the situation is even worse than it looks on this graph: Private health spending is racing upwards even faster than public health spending, so the problem the federal government is showing in its budget projections is mirrored on the budgets of every family and business that purchases health insurance.

All told, combined federal health care spending on Medicare, Medicare and subsidies for the purchase of private insurance on the Affordable Care Act exchanges is projected to grow from approximately 4 percent of GDP now to 8 percent in 2038 and a whopping 14 percent in 2085.
But as a new report from the President's Council of Economic Advisers this week shows, the news on health care costs public and private is good. It's a story, the Washington Post's Sarah Kliff quipped, "that contains billions of dollars' worth of good news!" 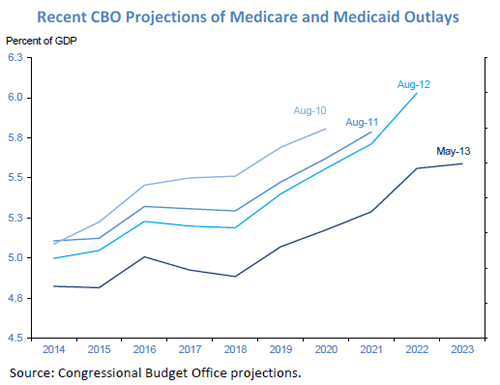 As Kliff explained, the CBO is now "constantly revising downward how much it thinks the federal government will need to spend on health care costs over the next decade. That's because health care costs have been growing a lot more slowly over the past few years than they typically do." That decline has been especially marked for Medicare, the old-age health care program that serves almost 50 million American seniors and represents the lion's share of federal health care spending.
The rapidly improving picture first became clear in March, when CBO projections showed a rapid deceleration in the rate of Medicare cost growth. As Sarah Kliff also reported in the Washington Post then ("Want to debate Medicare costs? You need to see this chart first"), that's the clear implication of a chart below from the previous Economic Report of the President. In a nutshell, the graph shows the trajectory for Medicare spending as a percentage of the American economy if the program grows at the much slower rates since 2009 compared to the much higher earlier projections. In February, the New York Times' Eduardo Porter explained:

All told, the CBO in March predicted that total Medicare spending for the decade between 2010 and 2020 will be $511 billion less than the agency estimated just three years ago. (In the 2012 fiscal year, Medicare spending per beneficiary grew just 0.4 percent.) "If that cost growth persists, it could make all the difference for Medicare," Kliff pointed out. "The entitlement program would, by 2085, make up 4 percent of the economy instead of the previously projected 7 percent."

But the improvement in the long-term diagnosis isn't limited to Medicare. As Kliff notes:

In private insurance, the average spending growth rate per person has slowed a lot over the last few years. In Medicare, there was no spending growth between 2010 and 2013 and, in Medicaid, per person costs actually decreased some.
All told, health care costs have been growing more slowly over the last three years than any other time period since 1965. More recently, yearly health cost growth slowed from an average rate of 3.9 percent between 2000 and 2007 to 1.3 percent between 2011 and 2013.

If these cost trends continue, Uncle Sam may not have much of a long-term debt problem, after all. But that's a big if. It is the $2.7 trillion question.
There are grounds for cautious optimism that the slowdown in health care cost growth--or at all much of it--will continue in the near-future. To be sure, the recession helped cauterize out-of-control health care spending, as cash-strapped families deferred medical care or flat-out avoided it altogether. The economic recovery, along with the addition of 27 million newly insured Americans by 2023, will push national health care expenditures upwards. But changes in the health care industry itself, including important reforms introduced by the Affordable Care Act, appear to be driving structural changes to spending.
For example, the CEA's report shows a significant drop in preventable readmissions to hospitals, a welcome development which appeared "right around the time Medicare began penalizing such return trips to the hospitals." Along with the encouragement of coordinated care organizations (CCO's) that are compensated not by procedure but by overall patient health, the ACA may in fact be institutionalizing cost-savings. As Kliff reported:

"The slowdown is indisputable," Council of Economic Advisers chairman Jason Furman said. "A very important part of that is structure, and a very important part of the structural story is the Affordable Care Act."
Most health care economists now agree, at least to some extent, with this more structural view. Even those who argue that the current slowdown is unlikely to last, such as Harvard's Amitabh Chandra and Dartmouth's Jonathan Skinner, still expect slower health care cost growth in the next decade compared with the previous one.

And that difference could make all the difference when it comes to Washington's policies and priorities. The Republican drive to ration Medicare through an underfunded voucher scheme, a cost-cutting plan certain to dramatically shift health care expenses onto future seniors, is even less justifiable now. Even more important, the debt-reduction fixation of the Austerians who still dominate the debate on Capitol Hill and in the American media will seem even more dangerously out-of-touch than it is now. And that means President Obama, Congress and the American people can focus like a laser-beam on Job #1.
Creating jobs.
(This piece first appeared at Dailykos.)