Ask Your Senator if Trumpcara™ is Right for You

Are you ashamed to be seen with your health care bill? Do you fear facing your own constituents? Are you plagued by feelings of dread and mild nausea at the thought of disappointing your seething supporters, angry activists and demanding donors?
If you answered "yes" to all these questions, you might be a Republican member of Congress suffering from moderate to severe Irritable Base Syndrome (IBS).
That's where Trumpcara comes in. Brought to you by the good people of GOPLabs®, Trumpcara keeps your IBS at bay. With one simple vote, you calm the outbreak of red rage and make your pain and discomfort--and insurance for 23 million Americans--disappear! 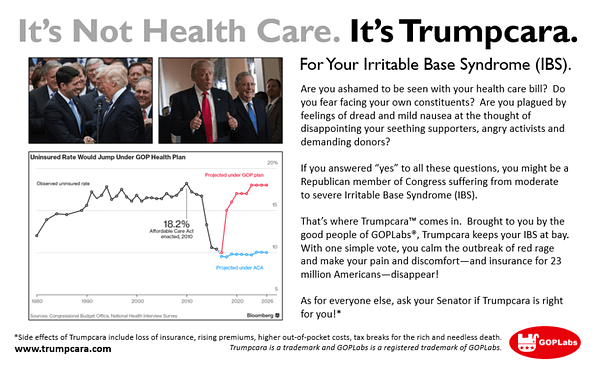 As for everyone else, ask your Senator if Trumpcara is right for you. Trumpcara (appallinghealthcareinamerica) legislation isn't recommended for anyone under the age of 65. Trumpcara can cause serious side effects, including:

Women should not handle copies of the legislative text. Nine out of 10 women who read the bill suffered from the immediate onset of severe depression due to the likely loss of coverage for contraception and maternity care. Women who are pregnant or considering becoming pregnant shouldn't take Trumpcara. In fact, in many states they won't be able to, as waivers from required "essential health benefits" will allow insurers to drop coverage for maternity care.
So, if you're a GOP incumbent and want to make it to November 2018 without being primaried, take Trumpcara. It's not health care. And in the Senate, it's not even a bill.
Trumpcara is trademark and GOPLabs is a registered trademarked of GOPLabs, Inc.