Bagging Blagojevich or How the Right Learned to Love Patrick Fitzgerald 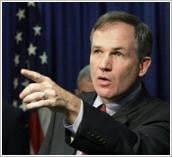 News this morning that U.S. attorney Patrick Fitzgerald has indicted Democratic Illinois Governor Rod Blagojevich predictably brought cheers from the conservative chattering classes. Blagojevich's arrest over the "pay for play" Senate seat vacated by Barack Obama and myriad other jaw-dropping corruption schemes Fitzgerald simply deemed "staggering" led the right-wing Hot Air blog among others to proclaim "Fitzmas arrives early this year." Of course, when the crime was obstruction and perjury over the outing covert CIA operative Valerie Plame as political payback by the Bush administration, the mouthpieces of the right slandered the Republican Fitzgerald as "politically motivated", "disgusting", "a lunatic" - and worse.
A walk down memory lane provides a rich history of the vitriol directed at Fitzgerald by conservatives circling the wagons around Karl Rove, Cheney chief-of-staff Scooter Libby and the Bush White House. In December 2003, Deputy Attorney General James Comey (who later ran afoul of Bush loyalists over the President's illegal NSA domestic surveillance program) described his Plamegate Special Counsel appointee Fitzgerald as "an absolutely apolitical career prosecutor" with a "sterling reputation for integrity and impartiality." But as the noose began to tighten around Libby's neck during Fitzgerald's investigation into the outing of Plame by Robert Novak, the Republican amen corner went after the messenger.
In the fall of 2005, Texas Senator Kay Bailey Hutchison rushed to Libby's defense in the wake of his indictment by Fitzgerald. As the opening salvo of the tried and true "criminalization of politics" defense, Hutchison sneered at what she derided as Fitzgerald's "perjury technicality":

"That if there is going to be an indictment that says something happened, that it is an indictment on a crime and not some perjury technicality where they couldn't indict on the crime and so they go to something just to show that their two years of investigation was not a waste of time and taxpayer dollars."

In the ensuing conservative war on Fitzgerald, former MSNBC host Tucker Carlson was among the first goose-stepping soldiers to volunteer. On October 24, 2005, Carlson regretted that the Bush White House hadn't started smearing Fitz much earlier. Carlson applauded Hutchison's line and said of President Bush, "He should have done that a long time ago," adding:

"I think politically [the Bush administration] did very much the wrong thing by saying nice things about Patrick Fitzgerald some months ago - 'he's a man of integrity,' 'he's a good guy,' 'we have complete confidence he's going do the right thing,' etc., etc. - making it now almost impossible for the White House, even on background, to attack the guy."

By February 2007 and with Libby's commutation still months away, Carlson was frothing at the mouth when it came to the topic of Patrick Fitzgerald. Carlson, who once had glowingly approved Ken Starr's inquisition of Bill Clinton, said of Libby's prosecutor:

"You shouldn't have these freelancers, like the lunatic Fitzgerald, running around destroying people's lives for no good reason. I hate this trial."

As it turns out, Tucker Carlson's fury towards Fitz was genetic. Never mentioned in any of his diatribes against Libby's interlocutor was the fact that Carlson's father Richard happened to be an advisory board member for the Scooter Libby Legal Defense Fund. (Failed GOP presidential hopeful Fred Thompson was also a key fundraiser for the Libby fund.) And to be sure, Carlson the Elder's jihad against Fitzgerald even extended to the Special Counsel's incontrovertibly accurate statement that Valerie Plame was in fact a covert CIA operative:

"I think it's certainly unseemly that he is kicking him while he's down. For Fitzgerald, to get on his high horse, it's disgusting and he should be ashamed of himself."

Of course, no Republican effort to protect its President and his miscreants could be complete without Weekly Standard editor and New York Times columnist Bill Kristol. In April 2006, Kristol took to the airwaves on Fox News to savage Fitzgerald over his inquiry into the Plame affair:

It's no surprise the Karl Rove targeted Fitzgerald as part of the U.S. attorney purge in 2006.
Alas, for all of these right-wingers, that was then and this is now. As Republicans rejoice over Patrick Fitzgerald's arrest of the Blagojevich, it appears that another Illinois Democrat, Obama chief-of-staff designate Rahm Emanuel, may have blown the whistle on the governor's latest alleged crime. But when it comes to Fitzgerald and his investigation into the smearing of the Wilsons over uranium in Niger, Robert Novak himself recently signaled unrepentant conservatives' hypocrisy:

"I would do the same thing over again because I don't think I hurt Valerie Plame whatsoever."

UPDATE: Almost on cue, the ever excreable Victor Davis Hanson of the National Review complained today that Fitzgerald "once indicted a staff aide for the VP for supposedly not explaining adequately - or indeed doing so in illegal fashion - how he had supposedly leaked the covert status of a CIA agent, who was not covert, and if she had ever been covert, was already first exposed by someone else known at the outset to the investigation."