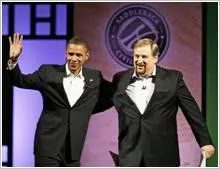 Across the blogosphere, liberals in general and gay activists in particular are livid with Barack Obama's choice of evangelical profit merchant and notorious homophobe Pastor Rick Warren to offer the invocation at his swearing-in on January 20. But those like AmericaBlog's John Aravosis who proclaimed the selection of Warren as "uncharacteristic of Obama" miss the point about the President-Elect's worrisome blind spot. Sadly, his kowtowing to the likes of Pastor Warren is part of disturbing pattern, a dangerous overconfidence in his ability to win over irreconcilable foes determined to undermine his agenda. Call it Barack Obama's Achilles Heel.
At his press conference Thursday, Obama defended his pick of Warren, the virulently anti-gay, megachurch supporter of Proposition 8 who also blessed the assassination of foreign leaders. (The Obama team's talking points are here.) Convinced of the symbolic power of his outreach and charismatic appeals, change agent Obama insisted he was building a bridge:

"It's important for America to come together, even though we may have disagreements on certain social issues. And I would note that a couple of years ago, I was invited to Rick Warren's church to speak, despite his awareness that I held views that entirely contrary to his when it came to gay and lesbian rights, when it came to issues like abortion...
...what we have to do is be able to create an atmosphere where we can disagree without being disagreeable and then focus on those things that we hold in common as Americans."

But as evangelical Americans overall and Rick Warren specifically have shown time and again, they are the immovable object to Barack Obama's irresistible force. For all his pandering to religious right voters, whether in pledging to expand President Bush's dangerous faith-based initiative, seeking common ground on "next wave" evangelical issues like poverty and global warming, personally revising the Democratic Party's platform on abortion or even attending Warren's disastrous Saddleback forum in August, Barack Obama has nothing to show for it.
To be sure, the Irreconciliables proved their point on Election Day. The monumental effort made by Team Obama to sway Christian conservative voters hardly moved the needle at the ballot box. Despite all of Barack Obama's best intentions, white evangelicals remained a GOP monolith. They preferred the McCain/Palin ticket by a staggering 50 points, little changed from the 57% delta George W. Bush enjoyed four years ago.
Obama should have learned his lesson after his near-death experience at Pastor Warren's supposed "Compassionate Leader Forum" this summer. Supremely confident of his ability to walk the walk and talk the talk on issues of faith, Obama made a hate-mongering bigot into a power broker in the 2008 presidential election. And he paid a steep price for it.
On that August night, Obama was a lion thrown to the Christians. While breaking his pledge to ask the two candidates the same questions, Warren gave the notoriously reticent McCain a pass on scripture. (Whether McCain also avoided the so-called "cone of silence" is almost beyond the point.) While an uncomfortable Obama squirmed in response to Warren's questions, John McCain enjoyed thunderous applause from a Republican audience determined to crush his opponent. The Washington Post and the right-wing National Review alike were surely right to declare McCain "the clear winner" at an event that for a time changed the trajectory of the race.
If his predictable beating by Warren and his radical right supporters wasn't sufficient to end Barack Obama's illusion about the malleability of evangelical Americans, their treatment of Richard Cizik should be. The vice president for governmental affairs for the National Association of Evangelicals (NAE), Cizik was forced to resign last week after creating a firestorm over comments seemingly sympathetic to gay marriage. His departure was the culmination of an 18 month campaign led by Focus on the Family's James Dobson to punish Cizik for his call to action on global warming which Dobson claimed was "dividing and demoralizing" evangelicals in their single-minded pursuit of their anti-abortion and anti-gay agendas.
No doubt, Barack Obama's stirring calls for national healing and unity were a major factor in his election victory and stratospheric approval levels. And in facing the daunting challenges of war and economic crisis, Obama will need to forge new alliances and partnerships by reaching out to friend and foe alike.
But on some issues, the opposition can never be accommodated, only defeated. When it comes to Americans' reproductive rights and the civil rights of gay Americans, evangelical political power must be stopped and rolled back. An overweening Barack Obama needs to learn that Pastor Rick Warren has no place on his political stage. Only when the threat from the religious right has been beaten down should President Obama offer them a hand up.
UPDATE: The Family Research Council's Tony Perkins weighs in, calling Obama's selection of Warren "magnanimous" given "his debate with John McCain at Warren's church in August was one of the high points of the campaign for McCain." Predictably, Perkins continues by pressing the Irreconcilable Right's case:

"Let's hope that Rick Warren will use his channel of communication to the new President to press him for more pro-family policies rather than simply being used by Mr. Obama to make political inroads with evangelicals."